Arkady Arkright said:
Six on the indictment may simply mean that the CPS feels that's all that can be proved in a court of law - a test that was never applied in the Savile situation.
Click to expand...

Possibly so, but we can only sensibly talk about the cases we know to have happened, rather than whatever hypothetical ones we choose to imagine may also have taken place.

Innula Zenovka said:
Possibly so, but we can only sensibly talk about the cases we know to have happened, rather than whatever hypothetical ones we choose to imagine may also have taken place.
Click to expand...

But as none of the Savile cases have ever been proved in a court of law, aren't they still 'hypothetical' ?

Arkady Arkright said:
But as none of the Savile cases have ever been proved in a court of law, aren't they still 'hypothetical' ?
Click to expand...

I know that several separate inquiries have disclosed large numbers of people who have made actual complaints about being sexually assaulted by Saville in a large number of different hospitals and schools.

The Metropolitan Police have received 450 complaints from people who say they were assaulted by Saville, and there are apparently over 100 more that we know of.

I know of six people who have alleged they were assaulted by this man at Great Ormond Street. Do you know of any more complaints?

He may have assaulted another six victims or another twelve, or any other number, but since we don't know about the existence, let alone the details, of any other complaints, what's the point in speculating?
Last edited: Nov 29, 2020

Sooooo you know, I'm not one to be all judgy about other people's fetishes - seriously for the most part I'm totally chill - you do you and be happy.

I am judging the hell out of whatever THIS stuff is, though

And then there's this f'in guy

FORT MITCHELL, Ala. (WTVM) - A 5-year-old child has died after being hit by a vehicle in Fort Mitchell, Alabama, Sunday evening.

According to Taylor, 35-year-old Bryan Starr was driving a car when 5-year-old Austin Birdseye began “being unruly” inside the vehicle, so he pulled over and told the boy to get out of the car. He then reportedly stated that he lost view of him in the rain.

Taylor says at that point, Austin wandered onto the busy Hwy. 165 near County Rd. 24, where he was struck by another vehicle and killed.

Taylor says that Starr, who is an active duty soldier at Fort Benning, will be charged with reckless murder. Starr turned himself in to the Russell County Sheriff’s Office.
Click to expand...

Way to go there, moron.
Reactions: Katheryne Helendale, RodeejahUrquan, bubblesort and 4 others

The "Proud Boys" in Washington, showing they're (and their) fascist assholes:
Freedom of assembly, ain't it great!
Reactions: RodeejahUrquan, Rose Karuna and Govi

Innula Zenovka said:
The "Proud Boys" in Washington, showing they're (and their) fascist assholes:
Freedom of assembly, ain't it great!
Click to expand...

This is probably TLDR but ...

Way back in the 80's, my ex and I went to visit his relatives in Northern Italy. They owned a bakery and the entire family lived in a building that they'd divided up for each of the individual families. They were wonderful people and I enjoyed my visit with them. Our conversation got around to the second world war and they took us outside and showed us bullet holes in the building where they lived. They said that this is where the fasci rounded up all the young men they could find left in the town and shot them, because they had not joined the "movement". Many of the women that day were raped. The family left the bullet holes in the wall so that they never forgot.

What the fasci in Italy really did: How Fascists Took Over Italy with Widespread, Intensely Personal Acts of Political Violence

The rise of fascism in the provinces of the Po Valley, in northern Italy, occurred in reaction to the remarkable postwar growth of Socialist power. During the biennio rosso (red two years), between 1918 and 1920, Socialists made huge electoral gains nationally and locally, while labor unions unleashed a wave of strikes unprecedented in Italian history. In the Po Valley, the Socialists established a virtual “state within a state,” winning control of municipal government, labor exchanges, and peasant leagues (unions). Socialists also founded cooperatives, cultural circles, taverns, and sporting clubs. Such working-class organizations exercised their power largely through legal means—elections, boycotts, strikes, and demonstrations—which nonetheless often led to clashes with police, with injuries and deaths on both sides.

Political culture and the social order had been radically altered, with rough peasants and workers occupying the halls of power and red flags hanging from town halls. For landowners, life in this new “red” state meant higher wages, higher taxes, reduced profits, lost managerial authority, deteriorating private property rights, and the threat of social revolution. Moreover, displays of red flags, busts of Marx, and internationalist slogans offended nationalist and patriotic middle-class sentiments. Conservatives denounced the “red terror” and “atrocities” of this period, though the landowners and middle classes were in little real physical danger. They were not physically assaulted, nor were their homes, offices, or private property damaged or destroyed. Yet, from their perspective, they lived in a world turned upside down. The Socialists had virtually “taken over,” and the liberal state appeared to have lost control of law and order.
Click to expand...

This was their [the conservatives] perception because they were losing control over the very people who labored and produced for them.

Fascists interrupted meetings, beat elected officials, and made impossible the work of local government. Socialists in particular were intimidated, threatened, and even beaten until they resigned. The consequences for the Socialist Party, which was entirely unprepared to counter organized, paramilitary violence, were disastrous.
Click to expand...

Sound Familiar? And don't think for a second that the police in the US aren't controlled, motivated and trained by the very people who are bent on controlling workers.

Thus, life for labor leaders became terror-filled, especially because Fascists did not limit their attacks to the public sphere. Nowhere was safe. Late at night, 10, 30, or even 100 Blackshirts, as these squad members became known, sometimes traveling from neighboring towns, might surround a home, inviting a Socialist, anarchist, or Communist outside to talk. If they refused, the Fascists would enter forcibly or threaten to harm the entire family by lighting the house on fire.
Click to expand...

Don't think for one second that these proud boys wouldn't do the exact same thing. (Think Governor of Michigan).

Although individual working-class leaders might have been willing to live under the constant threat of physical attacks, most were unwilling to subject their families to such danger. Deprived of leadership, meeting places, offices, records, and sympathetic Socialist town councils, the landless peasantry became subject to the landowners’ conventional tactics of strike breaking and intimidation. Having broken the leagues, the Fascists then forced the laborers into “politically neutral” (Fascist) syndicates. Vulnerable peasants had little choice but to join. Landowners used their newfound position of power to restore labor relations to the 19th century status quo.
Click to expand...

This is where America has been heading for a long time. Corrupting and breaking unions, bringing in labor from outside the country, outsourcing work to other countries, refusal of universal health care, refusal of a living minimum wage. Making laws that put more people in prisons than any other country in the world. Privatization of government services. All the things that the neo- conservatives say they stand for is geared to bring the worker back under their heel. Why average, everyday, working people support this is beyond me. Maybe they don't see themselves as average working people?

So when I see these "proud boy" assholes protesting, I can't laugh them off. Even if they wear skirts and paint their stupid asses. I KNOW what damage they can do. I'm just hoping we [the majority of Americans] don't allow it.
Reactions: Sid, Jolene Benoir, Isabeau and 6 others 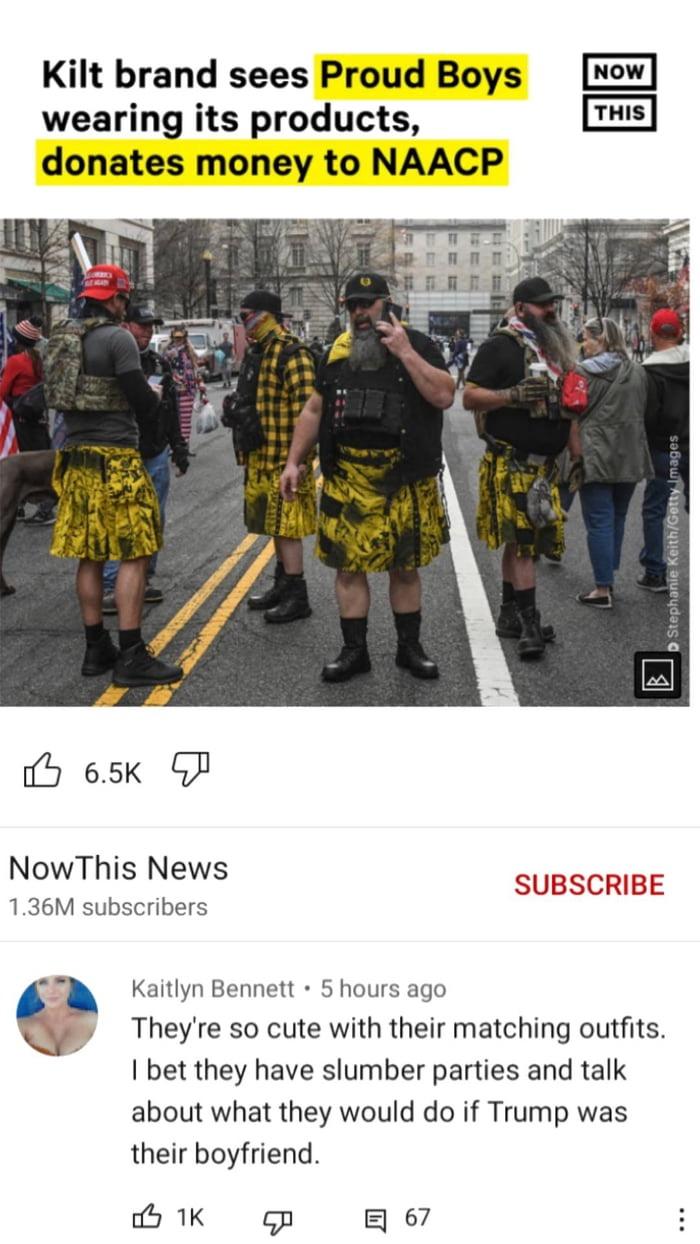 Don't want to be mistaken for thinking like those fuckers.

So, theoretically, since they are not protecting them, when they come up to punch you in the head you can give them a good kick in the cojones; maybe invest in some steel-toed boots for the occasion.
Reactions: Katheryne Helendale and Rose Karuna

The Virginia-based clothing company Verillas has denounced the alt-right group, donating proceeds from the kilts and more to civil rights organisation NAACP 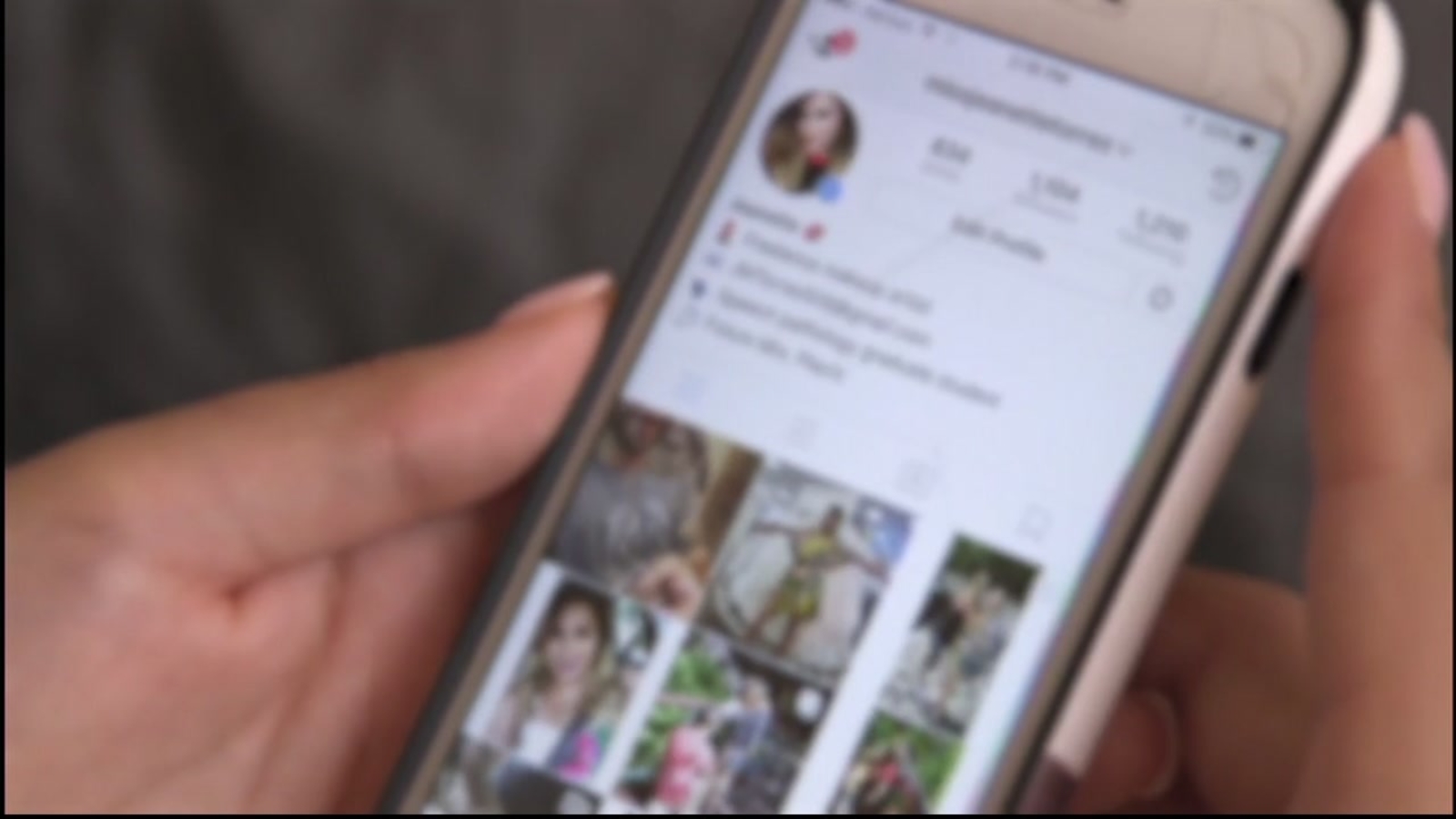 Debt collectors can contact you by email, text and social media starting next year

Starting late next year, debt collectors will be able to contact consumers by email, text message and even through social media.

This new track just came out this week, it's a protest song, or maybe more of a protest chant, from the original Lady A. She is being sued by Lady Antebellum, because Lady Antebellum wants to be known as Lady A now, even though the original Lady A has been using that name for something like 30 years. So a bunch of entitled honkeys are trying to steal a black female R&B musician's name, just like the crackers who changed the names of their slaves because power dynamics.

This all started because some overpaid consultant told Lady Antebllum that 'antebellum' is racist, so they should change their name to be more inclusive. Somehow, they think using lawyers, guns and money to change a black musician's name will make them appear less racist and more sensitive to BLM causes.

I do like country music, but I never liked Lady Antebellum's overproduced, plastic bullshit music. Before, their stuff was just annoying, but now I really despise them.

If you want to check out more of the original Lady A's stuff, here's her spotify page. My Name Is All I Got is a great protest chant, but it is not the best example of her considerable musical talents. I put her on heavy rotation on my driving playlist.

Being stalked by an ex-love interest, or some loser you never liked that couldn't take no for an answer, is scary enough as it is. Imagine getting stalked like this by someone you've never even met before.

COLLEGE PARK, Md. (AP) — A New York man was arrested Tuesday on charges he has been cyberstalking a Maryland woman for months, making threats that included soliciting people online to rape, kill and decapitate her in exchange for Bitcoin, federal authorities said.

The woman, who isn't named in the document, lives with her family in Maryland when she isn't attending an unidentified college in New York. She was a friend of Singh's older sister in middle school for one year before his family moved to Texas and has never met Singh in person, the agent said.

Since April, Singh allegedly has used more than 100 different social media, electronic communication and phone accounts to send harassing and unsolicited messages to the woman.

“These messages include express and implied threats of death and bodily injury, sexualized violence, and racial slurs,” the agent wrote.

In October, the woman contacted Baltimore County police to report that a user named “desmond” on the Telegram instant messaging platform was soliciting someone to kill her, according to the agent's affidavit.

Singh also is accused of accessing the woman's online accounts, changing passwords to lock her out and posting offensive images and messages on them. He “doxed” her, publicly posting her personal information online and encouraging others to harass her, the agent said. Singh also allegedly sent harassing messages to an ex-boyfriend of the woman because he apparently saw him as a romantic rival.
Reactions: Katheryne Helendale, Govi and Ryanna Enfield

LOL atheist Richard Dawkins has fallen for the War On Christmas.

>> I'm dreaming of a White Holiday.