Taking pride in his grift certainly is refreshing in the wake of the current parade of ninnies and twats.
Reactions: Halo Minoptra

The rich already cheat to get their kids into better schools. So I'm not really surprised, since the only difference here is the details of how the money changed hands. Otherwise it's private schools, tutoring, networking, etc. It works because the kids are confident and assertive enough to pass for clever as they go through life. 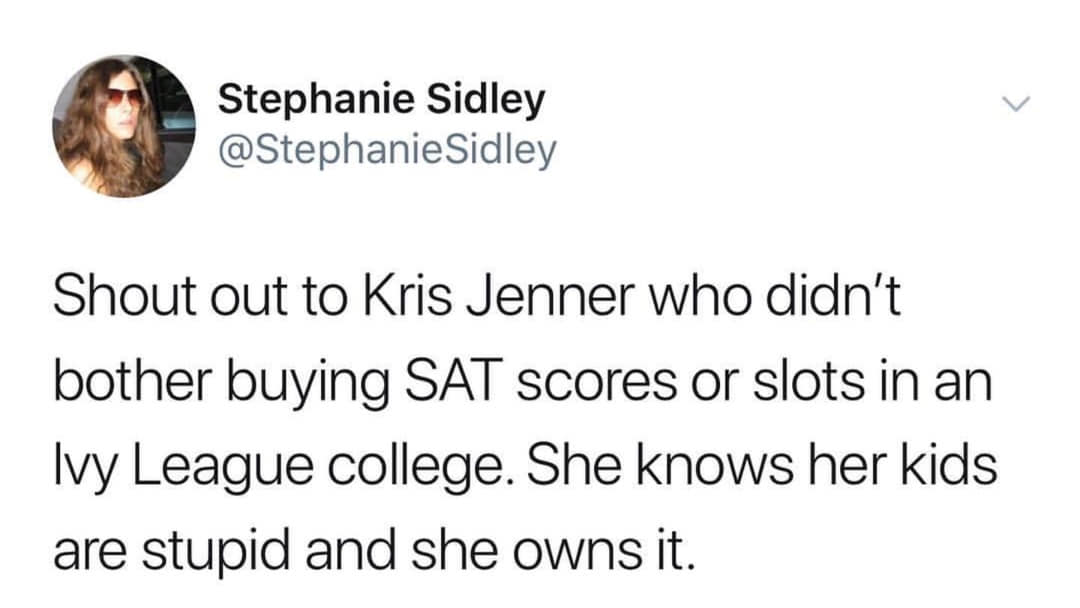 Not shown in actual size

I just saw this morning that Lori Loughlan's daughters have dropped out of UNC.
Reactions: Beebo Brink

From the comments section on this article: Admissions Scandal Victim Of Awful Handwriting Fame Publicly Apologizes

This awful handwriting says nothing negative to me about the person who penned it. It says fucking loads about the kind of parent who has this kind of wealth yet has never invested in their child’s BASIC educational development, and instead MOCKS their obvious delays in development.

Again, I am assuming that he doesn’t have a learning disability because if he did, and she was mocking him...

These people only cared that their offspring remained on-brand for the persona they have curated. The eighteen years before admissions time was spent not caring about their kid’s personal, intellectual, and education development. It says so much that this kid is going on a “I’m sorry I’m dumb” tour, probably orchestrated by his mother, the marketing exec.
Click to expand...

Seriously - who says the quality of education at these fancy schmancy schools is better than any other college/university? If anything it's probably lower since they'll have to dumb down classes to accommodate all the students whose parents bought their way in. So, it really is about networking and making connections.

This insight is spot on:

….the practice of gaming the system to get your kids into college may reinforce some of Americans’ most deeply held misconceptions about wealth and social standing, experts say.

The idea that wealthy people have all worked for and deserve their wealth is “a sacred value in this country,” Piff said.

“That’s kind of baked into the American dream,” he explained — and if we believe that rich people earned all their money, we’re more likely to put up with a big gap between rich and poor.
Click to expand...

Don't forget Beebo - there are those that actually buy into the absolute fiction that everyone can be well off (among other claims) if they just work hard/for it ....

Spirits Rising said:
Don't forget Beebo - there are those that actually buy into the absolute fiction that everyone can be well off (among other claims) if they just work hard/for it ....
Click to expand...

On that note: here's the version of her father's story as told by rich, white, entitled brat Olivia Jade:

“He didn’t come from a lot so it’s cool to see that he built it all himself,” she said. “He, like, built his whole entire brand and he wasn’t actually, like, I don’t know if I’m supposed to say this, ever enrolled in college. But he, like, faked his way through it and then he started his whole business with tuition money that his parents thought was going to college. That’s, like, such a different time. I don’t know if I was supposed to say that, but it’s okay.”
Click to expand...

And here's the details from his biography:

In his early twenties, the Southern California born-and-bred Giannulli began to cull inspiration from his surroundings, ultimately resulting in an eponymous fashion line, launched in 1986, that celebrated beach culture. After borrowing $100,000 from his father and dropping out of USC in 1987, the former architecture student set up shop in a garage in Balboa Island at Newport Beach.
Click to expand...

Yup, there's a rags-riches story if I ever heard one.

Please note that screwdriver reaction was directed at the subject, not you Beebs.
Reactions: Beebo Brink

Operation Varsity Blues: could we be staring at this generation's Watergate?

The more the FBI squeezes this case like olives, the more delicious oil-like details come out. For instance, the fact that Huffman has been arrested (and since released on a $250,000 bond and had her passport revoked) while husband Macy hasn’t. The reason? The FBI only had evidence of Macy getting involved in the preparatory stages of scamming the college system for their younger daughter, and the Huffman-Macys ultimately decided against pulling the trigger on that particular application process. So the actor gets off scot-free. Well, as scot-free as you can imagine a parent who has to have the “Dad: why did you guys pay $15,000 and risk prison for my sister but not for me?” conversation at every family dinner between now and death.
Click to expand...

Chav Paderborn said:
The rich already cheat to get their kids into better schools. So I'm not really surprised, since the only difference here is the details of how the money changed hands. Otherwise it's private schools, tutoring, networking, etc.
Click to expand...

Tutoring and private schools isn't cheating, though. It's just better education. Of all the ways rich people use their money that can be criticized, I honestly don't think paying for a better education is one of them.

I mean sure, the fact that rich people as a general set have access to higher-quality education than non-rich people is a problem that ought to be fixed; but on the individual level, what kind of parent who has that option for their child deliberately refuses to take it?
Reactions: Shiloh Lyric, Brenda Archer, Cristalle and 5 others

Cristiano said:
Operation Varsity Blues: could we be staring at this generation's Watergate?
Click to expand...

GoblinCampFollower said:
I hope this deeply damages the idea that going to a "fancy" school makes you smarter.
Click to expand...

I attended a "fancy-pants" school (Columbia University, in New York). My parents were working-class immigrants, so I got in on merit, not money. I don't know anyone who thought going to an Ivy League school would make you smarter. There were people like me who got in on brains, and others who got in on money, and we all knew who was who. What that kind of school gave all of us was opportunity. It just was a different opportunity for the two groups. For the rich kids, it let them make friends with other rich kids, and their families, so they could network later in life. For the smart kids it let them move up to a better career than their parents had. I became an engineer, but others became doctors, lawyers, scientists, etc. Also, a degree from a good school gave you a better chance to start your career with a good job right away, rather than having to work your way up from the mail room.

How much any of us got out of school depended on how much work we put in. There were fraternities where they partied all the time, and there were others (like me) who spent all our spare time in the library. One advantage the rich kids had was not having to work like I did, to help cover tuition. That left them more time to either study or party.

One thing I learned much later in life is schools like Columbia have self-serving reasons for letting in the smart kids. First, it enhances the school's reputation. Second, the ones who do well in life often donate to the school later. Third, some of the parents of rich kids hope exposure to brains will rub off on their progeny. So they are willing to pay full tuition and even donate to the school to get them in.
Reactions: Brenda Archer, Cristalle and Kamilah Hauptmann

I wish I could find that article... because while maybe the 'charity' thing is new, but having -someone- else writing papers, and applications, and such - well, seems to me that's cheating too.... and it has been going on a long time.
Reactions: Brenda Archer

danielravennest said:
For the rich kids, it let them make friends with other rich kids, and their families, so they could network later in life.
Click to expand...

This is the part that is the problem. Kids working hard to get into the school they want isn't a problem. I don't think we need nepotism born elite clubs.
Reactions: Ryanna Enfield and Govi

Aribeth Zelin said:
I wish I could find that article... because while maybe the 'charity' thing is new, but having -someone- else writing papers, and applications, and such - well, seems to me that's cheating too.... and it has been going on a long time.
Click to expand...