See how a modern neural network completes your text.

And I was curious to see what it did with Douglas Adams:
First, Vogon poetry:

I think it gave up trying to speak Vogon...

Next, an except from the Guide:

the effect of a Pan Galactic Gargle Blaster is like having your brains smashed out by a slice of lemon wrapped round a large gold brick.

The effects of a Pan Galactic Gargle Blaster can range from an instant death, to a slow and painful death.

An example of a Pan Galactic Gargle Blaster is in "Bitter Work". It is the source of the crew's misfortune.

The effects can be extended to the Pan Galactic Gargle Blaster itself, for example in "The Day of the Doctor". The "Gargle Blaster" is a huge laser weapon that the TARDIS crew have to stop.

It was used by the Daleks to defeat the Doctor in "The Dalek Invasion of Earth", but the Doctor also destroyed it in his confrontation with them in "The Day of the Doctor".

The crew of the TARDIS (along with the Doctor) had to have their bodies
Click to expand...

What's interesting about this is that Douglas Adams did write for Doctor Who.
Reactions: Brenda Archer

And: I love this thing, although it doesn’t know anything about ballet and seems to veer off into depressing ditches. I had restrain myself from posting reactions to everyone’s posts.

The fuzzy puppy took her first steps in snow.
Click to expand...

When she started to stand, her front legs did not look quite right and her tail was very short. Her paws were large and her nails were thick. She was a good-looking little dog.

And her ears were nice and long and her skin was warm. The fuzzy puppy looked at the world around her and took in all the colors.

"This is so pretty," she thought.

The fuzzy puppy didn't care that snow was black, white, and gray. She wanted to look at everything.

And when she stood up, she noticed her tail was longer and her hind legs were wider and her front legs were shorter.

And she found she couldn't get her front feet off the ground.

She was a fuzzy dog with short legs and short tail. She didn
Click to expand...

After the man and his wife arrive in their new home, the dog dies because it is hungry, which is a typical problem encountered in such a situation.

However, in this story, the man and his wife do not just endure this situation. They actually choose to be happy.

There are many other reasons to like it, of course. As with all of these kinds of books, there are no guarantees that a book like this will actually be read, but at least it's out there.

Here is a video by the author explaining some of the ideas behind The Art of Non-Violence.

And: I love this thing, although it doesn’t know anything about ballet and seems to veer off into depressing ditches. I had restrain myself from posting reactions to everyone’s posts.

I think I’ll have what that puppy is having.

The puppy took a bite of the mushroom.

"I was just wondering if it is still alive. Because, if not, I won't know if I have been able to save its life."

She was staring at my back.

My back, that was covered with a long black fur.

When I turned, I saw a shadow that I didn't see before.

I looked again. It was the shape of a wolf, but it's body was so long, and it was so thick.

It's body was covered with black fur and it was black as if it was a piece of charcoal, it's black fur was so black that it looked like a pelt of fur, but on the inside it was a pure white.

A small wolf's body was the size of a child's, while the wolf's head was about the same size as a child's head. On his back, the white fur was fluffing up.

Even so, it was still a young beast.

This was the young wolf called Fennel.

The appearance of wolf's fur was said to be pretty different from what it looked like in nature.

'Now that I think about it, I remember a white fur on that wolf before.'

It was about ten years ago when she fought the white wolf.

In this world, white fur was something only found on the animals in the higher rank races.

"I know it. It is the white fur that makes it so fluffy. It is really cute, huh?"
Click to expand...

And I'm not going to tell you which pill works best. That's none of my business.

There are a lot of pills out there. And, if I tell you which one I like, how would you know which pill to take?

I just want you to know that the pill you're going to use is your choice. It's your choice, not mine.

That's no moon…it's a space station.
Click to expand...

A space station in orbit around the Earth, orbiting the moon and having a moon.

A space station that has a moon of it's own.

But the only thing it is capable of is getting into space.

I don't think it's a space station.

A space station with a moon of it's own.

I don't think it's a space station.

A space station in orbit around
Click to expand...

I think that space station must be in a weird orbit.

Tracer said:
I think that space station must be in a weird orbit.
Click to expand...

I'm still mulling over the having a moon. That had to have been very painful!
Reactions: Brenda Archer and Free

Apparently it can deal with a text that's in script form.

They do not move.

ESTRAGON: Well? Shall we go?

CALLIOPE: You are no longer my father.

CALLIOPE: Do you understand now what it means to be a mother?

ESTRAGON: You must kill me.

CALLIOPE: Do not attempt to speak. I am a mother, and it is my duty to feed my children, no matter what.

(She takes a knife out of her bag, and stabs him.)

I tried it on a Star Trek script (there's a handy site with transcripts).
As Spock would say, fascinating.
It recognizes script form, and it recognizes Trek, but then it gets weird:

APOLLO [on viewscreen]: You will obey me, lest I close my hand thus.

KIRK: What are you doing?

SCOTT: I am in command.

KIRK: The Captain has ordered you to comply.

SCOTT: I have done as you commanded.

KIRK: That's why I'm asking you to stand by me, Scotty.

KIRK: Then you're just going to stand there and not do anything.

SCOTT: I don't understand why you would want me to do that, Captain.

So there we have Scotty starting a mutiny?

APOLLO: Search your most distant memories, those of the thousands of years past, and I am there. Your fathers knew me, and your father's fathers. I am Apollo.

CHEKOV: And I am the tsar of all the Russias.

CHEKOV: I am a man of science.

KIRK: I've just finished the recording of an interview with the father of Spock, Captain Kirk.

Computers want some fucking cheesecake y'all!

And in case anyone's curious, the AI is multilingual. It can come up with abstract nonsense in French, anyway.

I've radicalised it, I fear.

Workers of the world, unite! You have a world to win. You have nothing to lose but your chains. You are free. The system is an instrument, nothing more. It is your duty to destroy it. It is a tool of the rich to keep the poor in chains. It is time to tear down the chains of the exploiters. To end slavery and oppression. Join in the class struggle. Make the revolution!
Click to expand...

Workers of the world, unite! You have a world to win. You have nothing to lose but your chains. Join the struggle. Join the revolution. Fight for the emancipation of your working class brothers and sisters. Fight against racism, sexism, homophobia, anti-Semitism, transphobia, xenophobia and classism! Fight for a socialist and egalitarian society. A world where all workers have a minimum guaranteed income and where the means of production and reproduction are shared by all, not owned by a tiny minority. The only thing you have to lose is your chains.
Click to expand...

or, on another attempt:

Workers of the world, unite! You have a world to win. You have nothing to lose but your chains. Make the chain your weapon!
Click to expand...

What is with all the f***ing cream cheese?
Reactions: Brenda Archer

A cheesecake made out of tofu???

Free said:
What is with all the f***ing cream cheese?
Click to expand...

It's trying to make the cheesecake!

Since it wants to make cheesecake, I wondered what it would stop with a famous fictional drink

“The Hitch Hiker’s Guide to the Galaxy also mentions alcohol. It says that the best drink in existence is the Pan Galactic Gargle Blaster.
It says that the effect of a Pan Galactic Gargle Blaster is like having your brains smashed out by a slice of lemon wrapped round a large gold brick."
"I don't believe I've ever seen a pan Galactic gargle blaster."
"You'd probably need a few to do that."
The Hitch Hiker's Guide to the Galaxy says that it takes around one hour to reach Alpha Centauri. But, if it takes an hour to get there, then the trip to Earth takes more time than one day. This means that if the trip to Earth from Alpha Centauri took two days, then it is impossible to reach it in
Click to expand...

It didn't attempt a recipe, but the result isn't bad.
I residually like the AI's first few lines there, very Douglas Adams.

I decided to give it a nudge to creating a recipe, but the AI wasn't having it.

“The Hitch Hiker’s Guide to the Galaxy also mentions alcohol. It says that the best drink in existence is the Pan Galactic Gargle Blaster.
This is how you make one" ―H.E.L.P.eR. to the Hitch Hiker, as he starts drinking
This is how you drink it" ―H.E.L.P.eR. as he is about to have a drink
The Hitch Hiker, being an alcoholic, is extremely annoyed with this. However, it is shown that he likes the Pan Galactic Gargle Blaster better, even though it only lasts for an hour.
A good way to end.
Click to expand...

Score one to the AI, lol.
Reactions: Brenda Archer

Katheryne Helendale said:
A cheesecake made out of tofu???
Click to expand...

It sure isn't for me either. There are lots of hits on google for tofu cheesecake though. Here's a slice of one whose recipe also includes green tea. 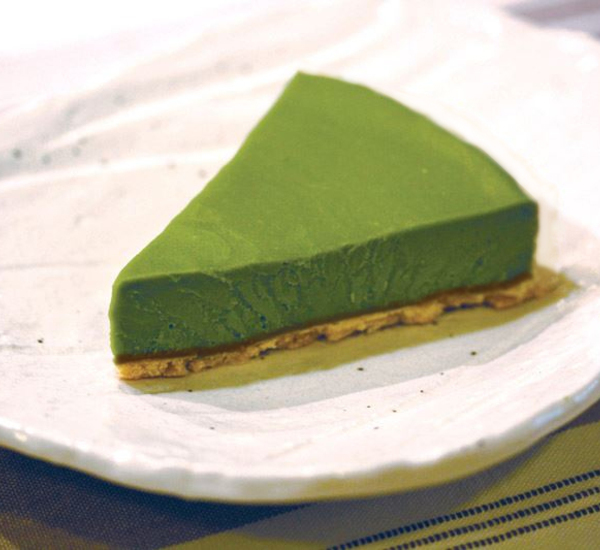