I really think people misunderstood Dany and that the show put too much of a rosy glow on her. While she's a typically successful Targaryen conqueror, she's not that great at ruling. We expect the beautiful, wronged young woman to be the hero, but other than freeing the slaves, pretty much everything she's done has been a part of her single-minded ambition. Lots of what she does causes a ton of death and suffering that could have been averted with a more savvy ruler. There are hints all the way through that she has instincts that are very much like her father's. Its not a secret. She's constantly saying things about how intractable she is when it comes to bending the knee to her rule. She's not getting ruined now, its just that the gloves are off.
Reactions: Pancake and Arilynn

Daario Naharis told her that she's a conqueror, not a ruler made to sit on a chair. The show has been telling us that, and so has GRRM to a certain extent. She has been willing to learn, but if she's bucking her advisors now, it's not necessarily a good thing. It is, and it isn't. She's a conqueror, yes, but her advisors are better built for rulers. The show has shown us that when it comes to the business of conquering she'd have been better off listening to her instincts. She's not cruel, but she doesn't like her authority questioned, just as Tyrion said. But ruling would have been possibly more difficult had she gone in and burned the city to remove Cersei. Ideally, she should have done it right after the loot train attack instead of letting Cersei recompose her forces. The delay allowed Cersei to consolidate her power and gain allies.

I have not liked Dany for at least half of the show now, her actions have been fueled by entitlement without much thought behind them, and have sometimes been flat out unreasonable. I guess people like her because she's pretty and went through a struggle to get to where she is now, but the pretty girl thing doesn't do anything for me, and I love when entitled people don't get their way .

That's one reason I have been rooting for Cersei, another is that because unlike Dany, she typically knows what the effects of her actions will cause, who will die, etc. and does it anyway without trying to convince everyone, including herself, that she's the good guy.
Reactions: Halo Minoptra

Vaelissa Cortes said:
I have not liked Dany for at least half of the show now, her actions have been fueled by entitlement without much thought behind them, and have sometimes been flat out unreasonable. I guess people like her because she's pretty and went through a struggle to get to where she is now, but the pretty girl thing doesn't do anything for me, and I love when entitled people don't get their way .
Click to expand...

I don't think its reasonable to look at the show through a judgement of "entitlement". To the inhabitants of Westeros, she /was/ entitled by the blood in her veins. The whole noble system tottered on that belief in the books. Being smarter or more capable didn't often have to do much with how far you got at the upper ranks. Renly might have been an exception to that rule (vs. Stannis), but in the end, it didn't serve him that well either.

Cersei is also portrayed as more competent in the show than she is in the books - and is very often thinking about how she deserves things.

That said, I do think that people watching the series love Dany because she's pretty and has a sweetness about her that resonates (when not murdering out of anger). I am actually hoping that the show doesn't end with her being lovely and sweet on the throne. That would be a huge disappointment.
Reactions: Cristalle

That's not what I meant though, I get the bloodline entitlement, it is her whole "I will get what I want and everything will go my way because I want it to" attitude I do not like. Like I said in a previous post, despite the awful writing, the concerned and upset expressions on her face in the last episode were so satisfying to me . 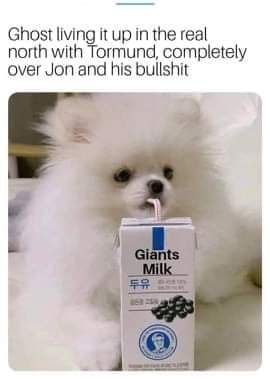 We were watching the episode of GOT where the Hound asks Sansa to run away with him, and I blurted out - right in front of Hubman - I'd run away with the Hound.

Those mother fuckers killed my Hound.

Well that was a whole bunch of exciting action sequences and beautiful cinematography, glued together with a whole lot of bullshit and stupidity.
Reactions: Sansarya, Zaida Gearbox, Ava Glasgow and 5 others

So assuming the show runners didn’t unilaterally decide to ignore all of the prophecies throughout the books, maybe Dany is the darkness Azor Ahai is actually meant to defeat, not the Night King. In which case, all signs point to Jon being the one to kill her. I’m also wondering if Cersei survived the collapse in the catacombs, because I don’t see any way that fulfills the prophecy about her death, even taken figuratively.
Reactions: Cristalle

What an incredible disappointment. I had a pretty low bar of expectations, but they still managed to come under them.

There was no dramatic suspense, no twists or turns, no surprises, just a couple of really long (tediously long) slug fests between characters, and lots of generalized carnage. Turning Cersei into a passive spectator -- after years of intensely clever maneuvering -- was the ultimate letdown.

Everyone from Varys to Tyrion to Cersei acted like they were in a stupor or brain-damaged. Jon has always acted that way, so no change there.
Last edited: May 12, 2019
Reactions: Halo Minoptra, Pancake, Myficals and 1 other person

I am not in the camp that feels Dany going Mad Queen is "ruining her character." I really believe that the signs have been there since the first season, and while for the majority of the show they could have jumped either way, her descent into insanity was pretty much cemented when she burned the Tarlys. That was the moment it was clear that's Dany's narrative wasn't going to have a happy end. Now having said that, the way this episode had her go all "Burn Them All" because... well I don't know why, my best guess is because she wanted to spite everyone telling her King's Landing could be taken with minimal deaths. The way that happened was just fucking insulting. Whoever decided that would be a satisfying story beat needs their Writer's Guild card burned. What a fucking joke of an episode.

(Don't even get me started on how Scorpions go from dragon hard counter to pointless stupidity in the space of one episode.)
Reactions: Ann Launay, Ava Glasgow, Cristalle and 3 others

The fight between Euron and Jaime was so contrived. Euron escapes drowning and crawls out of the water just as Jaime happens to stroll by. Really? And they don't even taunt each other about who is the father of Cersei's child?

Dany and Cersei never face off, not even through a window of the Red Keep as Dany flies by. Cersei just stands on a balcony and watches her entire world crumble, without a single treacherous scheme brewing in her head.

And the Mountain is some kind of magicked zombie that will not die unless thrown into the pit of Mordor... oh wait, wrong movie.
Reactions: Halo Minoptra, Arilynn, Zaida Gearbox and 4 others

Myficals said:
Now having said that, the way this episode had her go all "Burn Them All" because... well I don't know why, my best guess is because she wanted to spite everyone telling her King's Landing could be taken with minimal deaths.
Click to expand...

It was because they didn't love her and recognize that she'd returned to Westeros to save them. Ungrateful wretches.
Reactions: Arilynn and Cristalle

I will say that King's Landing went up nicely in orange and green flames.
Reactions: Innula Zenovka

During the beach fight I was so simultaneously angry and disappointed and flabbergasted at the stupidity I had to stand up. If Jamie had died there I might have thrown the remote at the tv. Not that their ending was more satisfying, but it was better than random beach stabbing. That’s the best I can say for it.
Reactions: Arilynn, Beebo Brink and NyteWytch

I foresee Arya personally taking out Dany, at this point. They had her down on the ground seeing first-hand the devastation caused on innocents, barely eking her own way out. Those people that she was trying to save, in particular the mother and child, are going to be all she sees when she next sees Dany. The question is: how they take out the dragon. Maybe Sansar is working on her own scorpion.

It was a bit contrived though, having her survive a stampede, assorted falling walls and what appeared to be a direct hit of fire while the mother and child were burned to a crisp.

If Cersei and Jamie died in that manner, that was quite a meek ending. Though, with these writers, they just may walk through the rubble.

Visually, this was amazing. But the writing is what may deny this episode the Emmy.
Reactions: Zaida Gearbox

Jolene Benoir said:
I foresee Arya personally taking out Dany, at this point.
Click to expand...

I was thinking that too, but the end scene with the white horse seemed a metaphor suggesting to me that Arya is done with death worship.

Who knows, though. So many storylines are wrapping up in such stupid and unsatisfying ways, it's starting to feel really pointless.
Reactions: Sansarya and Jolene Benoir

Two episodes ago:
7 seasons of the Night King being a threat, gone.

Is there a way for the show to come to a satisfying ending at this point?
If Jon ends up king, it would be disappointing, it feels like he keeps failing upward, and very lame.
If Dany ends up queen, it would be frustrating after what she did.
Could Arya kill Dany? Possible. Would that be satisfying? I'm not sure. It might be more satisfying if Brienne kills her.
If nothing happens to Bran Stark, I'll have to add: 7 seasons of Bran becoming a powerful seer, gone.
Last edited: May 13, 2019
Reactions: Halo Minoptra and Ava Glasgow
Show hidden low quality content
You must log in or register to reply here.
Share:
Facebook Twitter Reddit Pinterest Tumblr WhatsApp Email Link
Top Bottom