Soen Eber said:
The thought of Trump having a public defender excites me!
Click to expand...

But the poor public defender.
Reactions: Rose Karuna, RodeejahUrquan, Govi and 3 others

I need this on a tee.
Reactions: Jolene Benoir

I guess we have to call this impeachment proceedings of a not yet sitting president.
Click to expand...

Soen Eber said:
The thought of Trump having a public defender excites me!
Click to expand...

How about if he appears pro se, conducting his own defence?
Reactions: Rose Karuna, RodeejahUrquan, Casey Pelous and 1 other person

Innula Zenovka said:
How about if he appears pro se, conducting his own defence?
Click to expand...

It would be the best defence, the hugest defence ever...
Reactions: Rose Karuna, Beebo Brink, Isabeau and 4 others

Arkady Arkright said:
It would be the best defence, the hugest defence ever...
Click to expand...

The best defense is a huge offense. And a huge defense.

Soap opera at its finest. And scummiest.

Off the rails: Trump's premeditated election lie lit the fire

Axios takes you inside the collapse with a special series.

Beginning on election night 2020 and continuing through his final days in office, Donald Trump unraveled and dragged America with him, to the point that his followers sacked the U.S. Capitol with two weeks left in his term. This Axios series takes you inside the collapse of a president.

Episode 1: Trump’s refusal to believe the election results was premeditated. He had heard about the “red mirage” — the likelihood that early vote counts would tip more Republican than the final tallies — and he decided to exploit it.
Click to expand...

The Georgia Runoff Election Results are now official. Perdue loses by 55,000 votes (1.22%), Loeffler loses by 93,000 votes (2.08%). Ossoff and Warnock now head to the Senate to get sworn in.
Reactions: Ryanna Enfield, Isabeau, Jolene Benoir and 3 others

House Minority Leader Kevin McCarthy (R-CA) on Thursday denied that he, in fact, voted to overturn the election results as...
talkingpointsmemo.com


The whiny ass titty babies are on the comeback!
Reactions: RodeejahUrquan, Aribeth Zelin, Ryanna Enfield and 2 others

As someone commented (elsewhere), the discovery phase of this is gonna be infinitely watchable.
Reactions: Innula Zenovka and RodeejahUrquan

A look back on the Shit Train. The mood was already tense in Detroit’s expansive ballot-counting hall when President Trump tweeted on Nov. 4 that “a terrible...
talkingpointsmemo.com
Reactions: Govi

Here or the coup thread...I could go either way with shit stains like this. Goya board of directors censures CEO for comments about election fraud

Robert Unanue previously praised then-President Donald Trump at a White House event, saying the country was “truly blessed” to have him leading it.

Goya’s board of directors has reportedly voted to censure CEO Robert Unanue after he made unfounded public claims about voter fraud during the 2020 presidential election.

On Inauguration Day on Wednesday, Unanue appeared on Fox Business and said that President Joe Biden’s win was “unverified” and spoke of a coming war.

"I think this is mission accomplished, by the union, the partnership, the conglomerate of social media, big tech, big media and big government for ushering in the dawn of a new world order,” Unanue said on air. “There is a war coming, now that the president is leaving today, they're still coming after the United States, the working class.”
Click to expand...

Romney continues to show something of a backbone. Who knew? 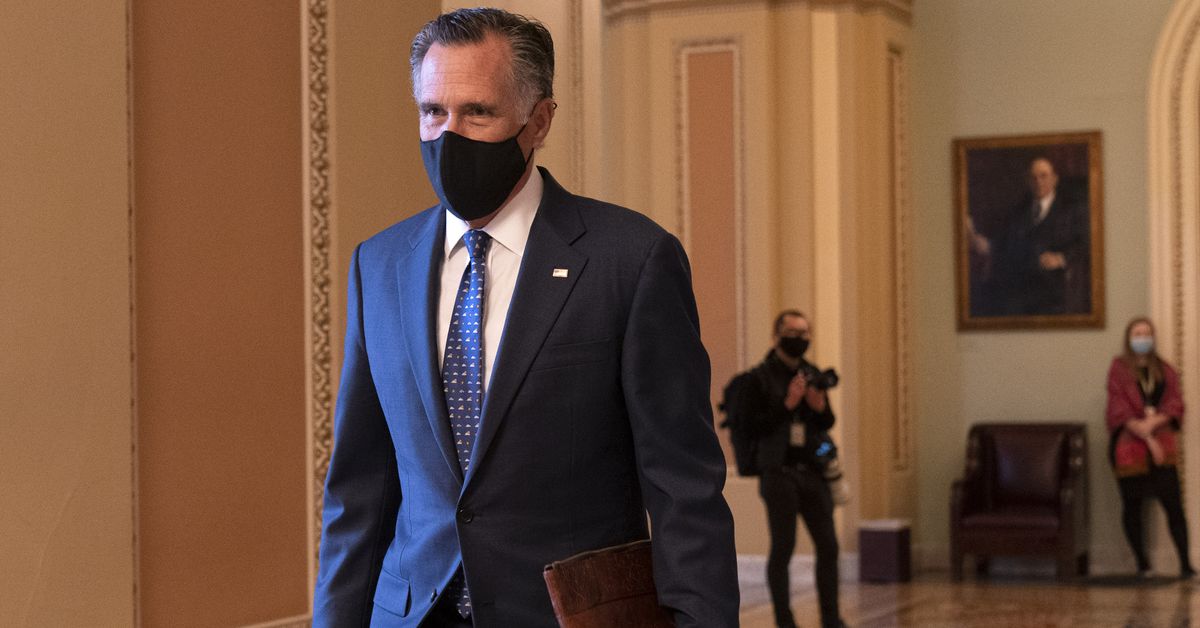 Former President Donald Trump will never admit that he lost a fair election but every elected Republican ought to be telling voters that he did as a step toward bringing the country together, Utah Sen. Mitt Romney said Tuesday.

In addition to social media perpetuating the “big lie” that Trump is somehow still president and President Joe Biden stole the election, GOP officials, too, are contributing to that notion, the Utah Republican said.

“You have many of the Trump supporters in elected office, senators, congresspeople, governors, continuing to say the same thing, that the election was stolen,” Romney said.

But, he said, what they should tell people is that the Trump campaign “had a chance to take their message to the courts, the courts laughed them out of court. I’ve seen no evidence that suggests that there was widespread voter fraud.”
Click to expand... Op-Ed: I called Arizona for Biden on Fox News. Here's what I learned

The news business operates in a marketplace that offers penalties for reporting the news but lots of rewards for indulging a consumer’s worst cravings.

When I defended the call for Biden in the Arizona election, I became a target of murderous rage from consumers who were furious at not having their views confirmed.

Having been cosseted by self-validating coverage for so long, many Americans now consider any news that might suggest that they are in error or that their side has been defeated as an attack on them personally. The lie that Trump won the 2020 election wasn’t nearly as much aimed at the opposing party as it was at the news outlets that stated the obvious, incontrovertible fact.
Click to expand...