disney+ The Book of Boba Fett

Premieres a few days before the end of 2021.

The first chapter came out yesterday.

So far, meh OK not exciting but I'll keep watching. I get the why, but I felt there was a bit too much remodeling origin story onward from the sarlacc pit. (Is that a spoiler? Did anybody think they wouldn't begin with the sarlacc pit?) Or maybe there was not enough Ming-Na due to that.


I have no problem with the speed of egress Boba manages from the sarlacc. If they'd followed along with the expanded universe stories, the entire episode would have been about his escape, and I really don't care enough about a giant, tentacled, sentient hole in the sand to have to sit through that.

Temuera Morrison does a pretty good job with the "Stranger in a Strange Land" version of Boba, especially during his crime lord training. The "Hey, he used to be *my* boss!" asides nicely point out just how fish out of water the old bounty hunter really is in that chair.

Ponderings:
One thing in the flashback sequence I found interesting and felt added something to the Star Wars mythos was the sandpeople 'tribe'. From the kids beating the crap out of Boba to the drink the chief handed him after his return from the Harryhausen sand monster fight, the story itself was pretty tropey but they gave so many of the Tusken Raiders enough personality and peculiar traits that I watched it all with a sense of genuine gratification.
Reactions: Lexxi, Romana and Govi

The Star Wars universe can be lived in without being @TENTHOUSAND1 all the time. A bounty hunter west wing sitcom might be refreshing for a change. But I have not Disney+ to find out.
Reactions: Beebo Brink and Romana

I loved the Mandalorian, but bringing Boba Fett back was stupid. I love Boba Fett, but I also want him to stay dead, so I have no interest in this show.

Well I'm enjoying it. And the second episode I found to be pretty great.


The "long speeder" chase was the best sequence of this sort I think I've seen in a Star Wars product. And the continued mythos building with the Tusken Raiders tribe or clan was cool.
I guess a Star Wars show without a lot of space battles and laser swords takes some getting used to.
Reactions: Beebo Brink

Tonight I made it through about 20 minutes of the first episode before my attention wandered so much that I lost track of what was going on. Lots of frenetic activity, but nothing that made me care what happened.

Does he sparkle in sunlight?
Reactions: Beebo Brink

I can't get into a show that sounds like Grandma's collection of feta cheese recipes.

danielravennest said:
I can't get into a show that sounds like Grandma's collection of feta cheese recipes.
Click to expand... 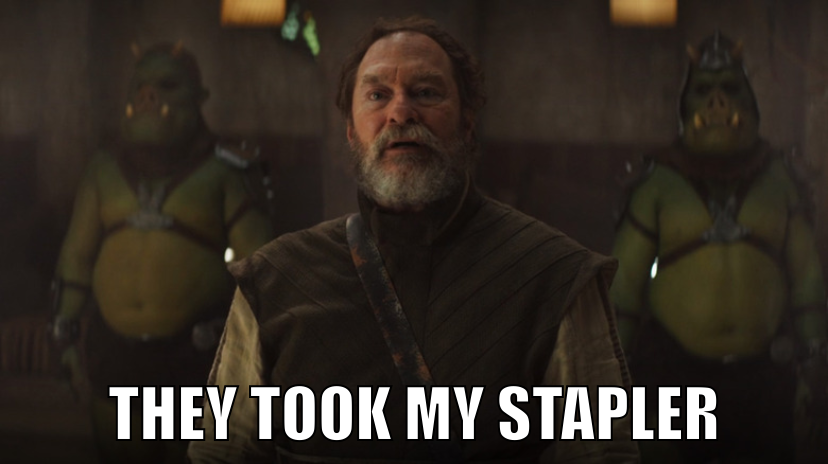