Beebo Brink said:
Mrs. Beebo and I had an emotionally fraught discussion yesterday. She came back from running an errand, angry and upset, after seeing an incredibly racist decal plastered on the back of a pickup truck in the Lowe's parking lot. She feels strongly that this sort of overt, in-your-face racism needs to be confronted, and I agree with her, but the question is how to do so effectively and constructively.

My wife had wanted to confront the driver and tell him how offensive that decal was, but the truck was gone by the time she finished shopping (for which I was actually relieved). I pointed out that he's already quite aware that it's offensive -- after all, that's the POINT of it. Best case scenario is that being told that it's offensive will probably make his day for having offended some "librul" (bonus points that it's a elderly dyke who is offended). Worst case scenario is that the driver reacts violently to her.

But, as she so rightly stated, NOT saying anything is no longer acceptable either.

We're stumped as to how to deal with this in an ethical way. We live in a deeply red state that went overwhelmingly for Trump and a populace that takes everyday racism in stride (when not actively applauding it). Any gesture of defiance is unlikely to garner much support, or so we assume, and it's that assumption that itself is repressive. On the other hand, what gesture do you make? How do you meaningfully fight back? I can easily envision how to speak up in the middle of a conversation with someone, but not how to deal with the in-your-face offensive public speech of a decal.

Mrs. Beebo has a temper and (unlike me) is not the least bit apprehensive about confrontation. I can easily see her berating some absolute stranger for being an offensive racist, just as I can easily imagine him beating the shit out of her (she's a 5'2" 70-year-old woman with massive health problems). Is it cowardly to worry about safety? Does a brave stand accomplish anything?

We're really grappling with the nitty gritty of response. Any thoughts?
Click to expand...

Safety first - I don't think confronting strangers really helps anyway. Confronting family, friends and co-workers who say or do something out of line, actually might make a difference, but strangers, not so much. Unless they are actually screaming at or berating another person (which there is no choice but to step in and defend the person they're bullying).

With as many of these assholes that have guns and are so willing to "hold their ground" it could be very dangerous.

but I'm not saying I haven't done it either ...

And this here, with -everything- else going on in the world, is why I'm going to make my twitch stream political [if I can find the time to stream....]
Reactions: Innula Zenovka

Hey, Wells Fargo is back in the news. As usual, it's not for anything good. Even worse, this story could go either here or in the That's Sexist! thread... 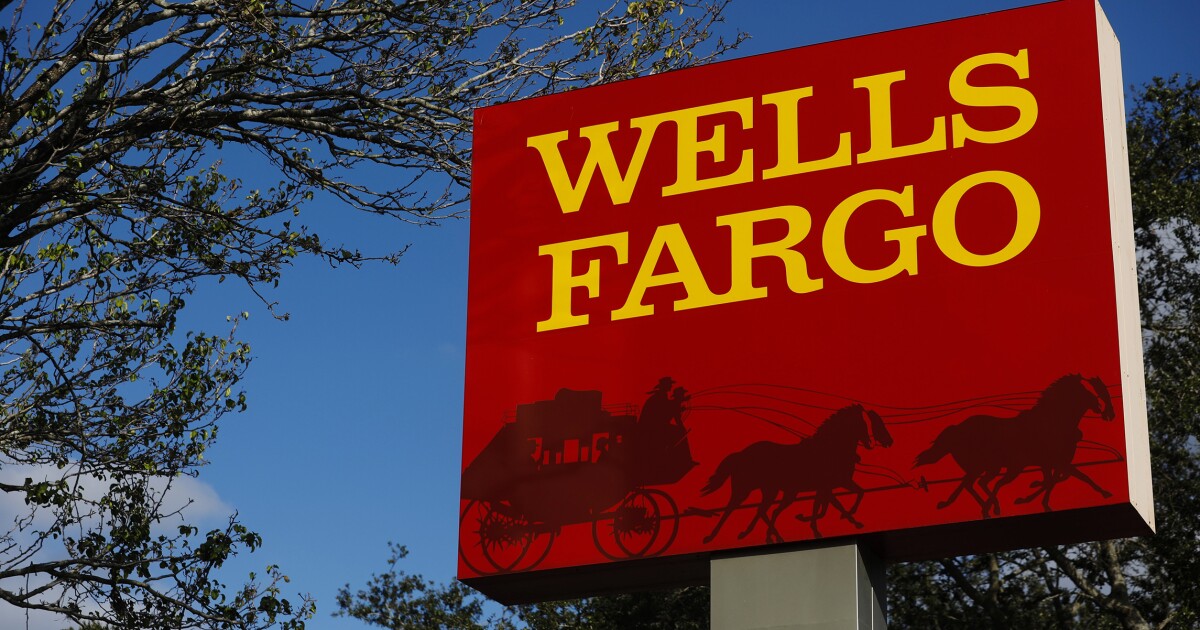 Wells Fargo routinely interviewed women and people of color to record diversity efforts in its hiring practices despite already offering the positions to other candidates, several employees have alleged.

Wells Fargo routinely interviewed women and people of color to record diversity efforts in its hiring practices despite already offering the positions to other candidates, several employees have alleged.

The banking company has a long-standing informal policy that employers interview “diverse” candidates, defined by the company as women or people of color, for open positions. However, several employees said they began to realize candidates were often interviewed for positions that had already been offered to someone else.

“You feel very uncomfortable being on the other side of that table doing an interview, and you know that candidate has a zero chance of getting the job — zero,” Joe Bruno, a former Wells Fargo executive, told Action News. “These are real human beings on the other side of the table. They have families. I have a family. It’s just wrong.”
Click to expand...

This training for teaching staff in nurseries is presumably an example of what so upsets Republicans, just as it upset a Conservative MP over here

You know, I'm kinda half in on that.

Because the way we're going with the radical right, corporate greed, the selfish, and so on we'll just destroy ourselves as a country. Also, it's kinda baked into our system anyways with demographic changes anyways.

Surprise thing is, after this happens, we're going to discover a lot of minorities are actually fairly conservative (but not in the wingnut way), once things stabilize and they're no longer being the ones kicked.
Reactions: Govi, WolfEyes and Aribeth Zelin

Soen Eber said:
You know, I'm kinda half in on that.
Click to expand...

Half in on what?

Surprise thing is, after this happens, we're going to discover a lot of minorities are actually fairly conservative (but not in the wingnut way), once things stabilize and they're no longer being the ones kicked.
Click to expand...

If you're even "half in" on acceptance in the Great Replacement Theory, then the far-right nationalists win, immigration is dead for this country (except for those needing to immigrate away from it), and any expectations you may have on things stabilizing will be little more than a pipe dream.
Reactions: Govi and Beebo Brink

Soen Eber said:
You know, I'm kinda half in on that.
Click to expand...

Free, this is a "I'm okay with (insert-name) overlords" tongue-in-cheek recognition of how badly White People have fucked up governing (and even just residing in) the U.S. Not to be confused with sober acknowledgement of a crazed conspiracy theory.
Reactions: Katheryne Helendale, Free, Ryanna Enfield and 4 others

'Classic' 'conservative' projection. We know they are trying to change the demographics to keep themselves in power, and to regain lost power. So obviously, the 'Left' must be doing that too.

' ' to indicate relative, not absolutes - since our conservatives aren't, and our Left isn't [well, left in government, we have a real left in the US, but....
Reactions: GoblinCampFollower

Beebo Brink said:
Free, this is a "I'm okay with (insert-name) overlords" tongue-in-cheek recognition of how badly White People have fucked up governing (and even just residing in) the U.S.
Click to expand...

If only that's how they also recognized it. I'm really starting to need a workbook for when sardonic acceptance is useful, and when you just have to burn them.

“If no one’s told you they care about you today, know that I do ... and there is absolutely nothing you can do about it!”
Click to expand...

That is so much better than Sister Michael Rose's "I challenge you to do better!" announcements. She made a horrible principal.
Reactions: Innula Zenovka

So, some dumbass white male posted an answer on Quora that had, among other things this 'But good blacks don't call the disrepectful, criminal etc. ones on their stuff like every other group.

So, because I'm losing patience with this sort of BS, I answered 'Do you call white people out on being disrepectful? Because most of the ones I know don't even respect each other, if you don't, then this is utter BS'

Who knew it was hate speech? I am contesting it, with the logic of if my statement is hate speech, then so was the one I replied to.
Reactions: WolfEyes, Ryanna Enfield and Katheryne Helendale

How to prove you're racist while claiming you're not racist. 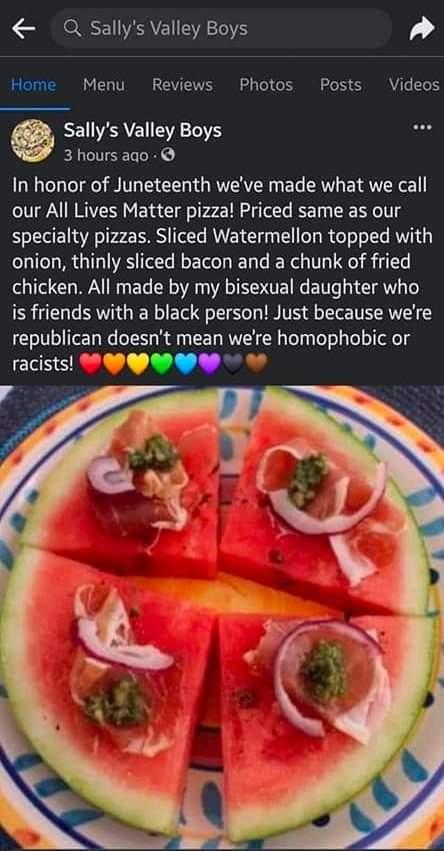 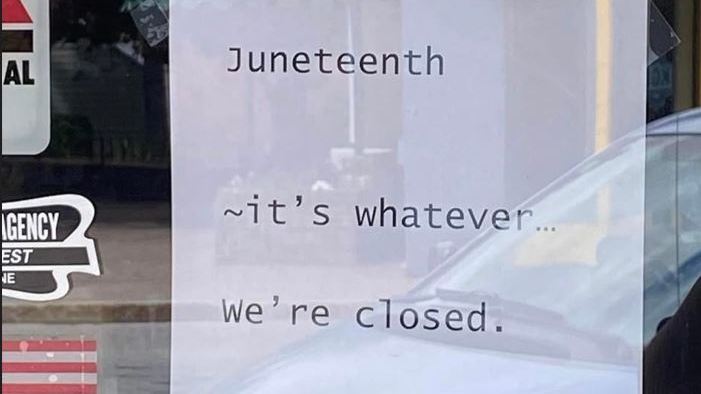 An image of the racist sign was shared online Monday, gaining the attention of thousands across social media. 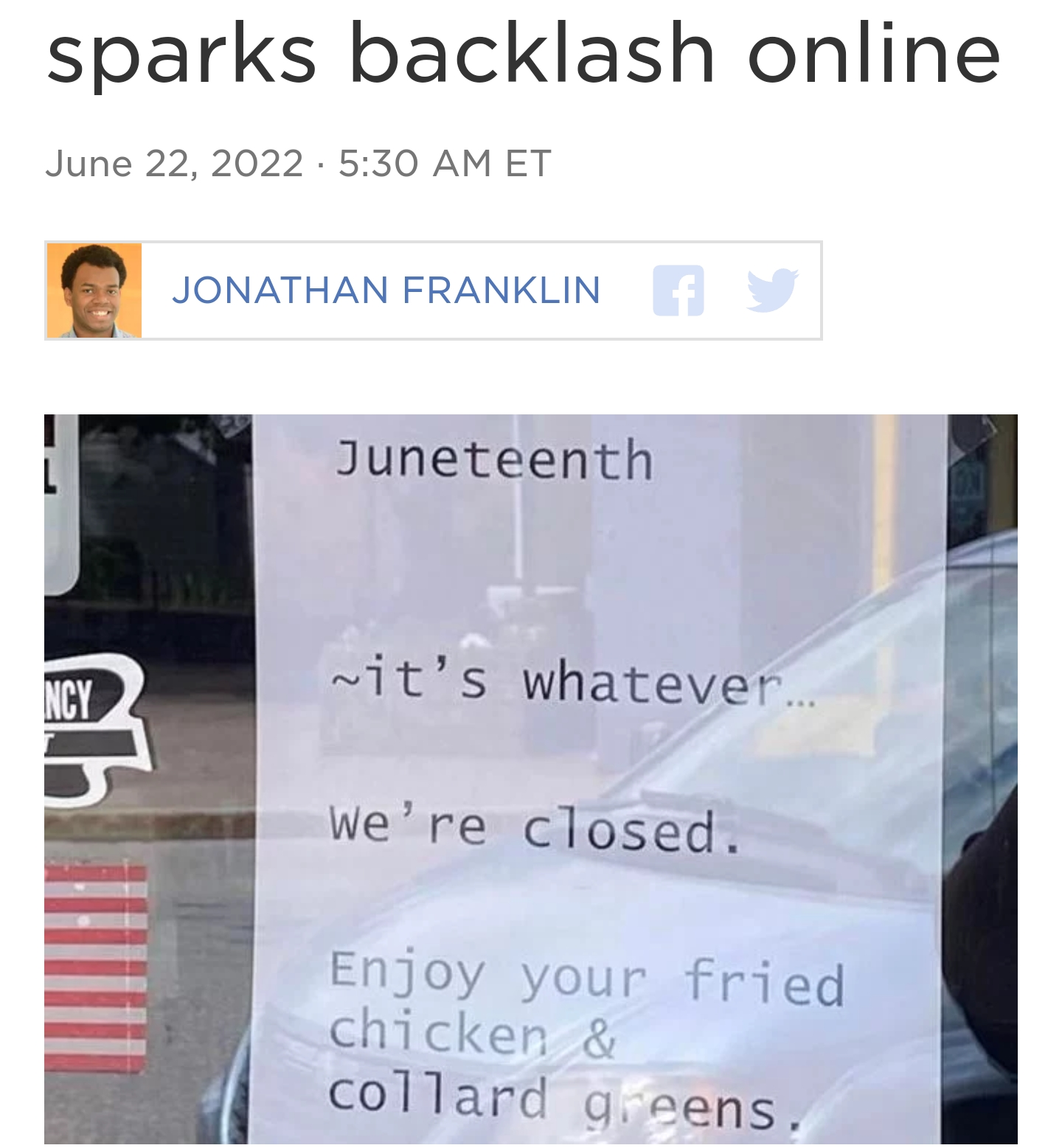 Why yes thank you, I do enjoy my fried chicken and MUSTARD greens. What [white] southerner doesn't?

I don't usually like southern style greens, but lightly braised in bacon fat and with a splash of apple cider vinegar is good.