std::string str ("Nobody cares about development...");

Gotta start at the command line. 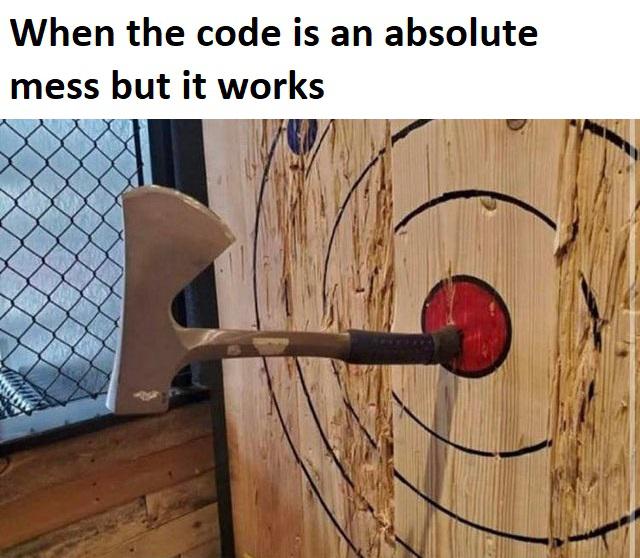 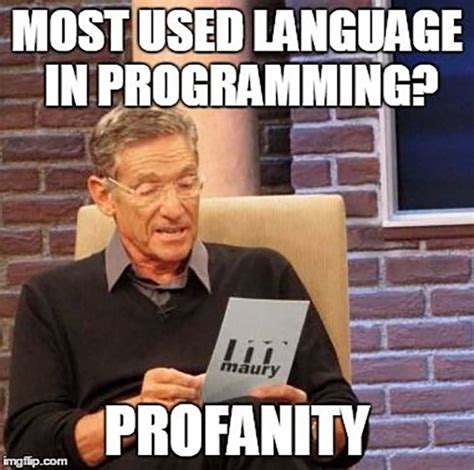 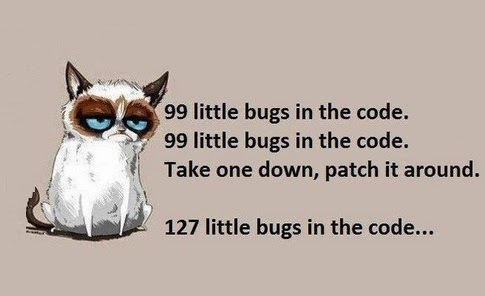 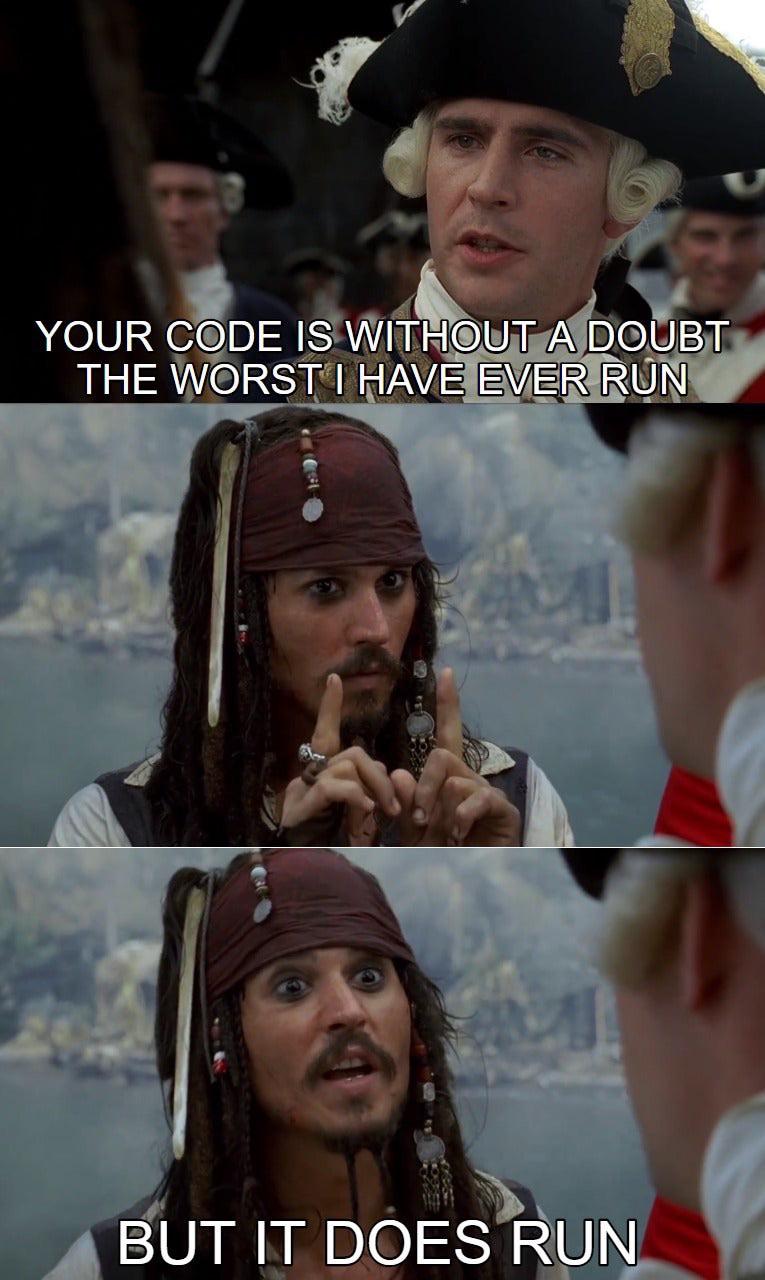 Reactions: Kalel, Sid, Govi and 4 others

In college I was dabbling with some code and accidentally declared something vaguely like:

I got an error complaining about "Wasted Space". Which sent me into a total gigglefit as I imagined the vacuum of space sucking on a big cosmic bong and laconically mumbling "Hey man, this code man... it's totally surreal!"

I myself was high on nothing more than extreme amounts of caffeine and having been awake for more than 24 hours straight at the time...

For all your animated coding truths.
Last edited: Jun 4, 2020

Great site: "How to program 99 bottles of beer" in over 1500 different programming languages.

Today: Brainfuck! The design goal of Brainfuck was to write the smallest possible interpreter/compiler, and it was successful - most compilers are 200 bytes and less, one less than 100 bytes. Interpreters are also around. The language itself is by the way Turing complete.

Bartholomew Gallacher said:
Great site: "How to program 99 bottles of beer" in over 1500 different programming languages.

Bartholomew Gallacher said:
Great site: "How to program 99 bottles of beer" in over 1500 different programming languages.

Today: Brainfuck! The design goal of Brainfuck was to write the smallest possible interpreter/compiler, and it was successful - most compilers are 200 bytes and less, one less than 100 bytes. Interpreters are also around. The language itself is by the way Turing complete.
Click to expand...

It's the javascript one that really freaks me out. Brainfuck is supposed to be obscure.

You can obfuscate any language if you want to do, and the author of the Javascript example wanted to just do that.

Bartholomew Gallacher said:
You can obfuscate any language if you want to do, and the author of the Javascript example wanted to just do that.
Click to expand...

While that is true, some languages are scarier than others due to the way they are processed.

Right - and some esoteric languages are quite elaborate, like Shakespear.

auto str = "Nobody cares about development..."s;

auto str = "Nobody cares about development..."s;
Click to expand...

I have basically been building an entire custom CMS framework in PHP with some jquery with an MSSQL backend for internal use at work and I feel like one day some higher up is going to just shitcan everything for something else new before its finished and its a little frustrating that In have put a ton of work into this and it works pretty slick and looks nice but it may never get used.

Its being built to replace our current Cold Fusion based site.
Reactions: CronoCloud Creeggan, Argent Stonecutter and Ashiri

This was back in the early '80s. I was writing the compiler/interpreter for a real-time control language based on relay logic (it was really tough to get real time customers to accept anything more modern than WWII), and the other guy (project leader) was writing the actual real-time control stuff. Since this was in Forth I wrote a recursive descent parser and the other guy went ballistic and insisted it should be a proper testable LALR(1) parser and came up with a scheme that the parser should be written in YACC and then the resulting C tables and parsing engine would be converted to Forth to run on the target hardware which had like 12k of RAM and ran raw Forth with a Forth scheduler and Forth file system and Forth memory management and so on, it didn't even have malloc(), and had me start from scratch to write the real-time-control part and spent a year on his mad science "testable LALR(1) parser", or maybe it was "provable", ... anyway ...

I had already completed the parser AND interpreter and had it handing off events properly and everything in about six weeks and thought we were almost ready to ship, and then the whole thing spent a year in a death march before being killed.

He also wanted to rewrite "vi" because it didn't let him define word delimiters or something.
Reactions: CronoCloud Creeggan, Noodles, Jopsy Pendragon and 1 other person

Ashiri said:
It's the javascript one that really freaks me out. Brainfuck is supposed to be obscure.
Click to expand...

If you run that obfuscated javascript through a deobfuscator after removing the html at the top and bottom it comes out pretty clean.

I've dabbled in some weird languages, APL, PL6, SNOBOL, ADA ... but my worst project was subcontracting to re-writing a pawn shop inventory/point-of-sale system for a shady contractor. I dunno what version of BASIC it was written in, but it couldn't handle IF/THEN/ELSEIF/ELSE/ENDIF. It had IF (value) GOTO (linenumber).

The code was obtuse. Deliberately I found out later because it was doing criminal things like "Hiding" inventory that customers had defaulted on so the pawn shop owner wouldn't have to pay taxes on them as assets. The contractor flipped his lid when he saw that my re-write detangled his illegal crap and clearly stated exactly what it was doing. He refused to pay me because he 'objected to my use of if/then/else' statements in the re-write and demanded I do it over again using his "standard" on/val/goto crap.

I was hourly and cheap at the time, and he stiffed me on half of what I was owed. I couldn't afford a lawyer at the time, and was honestly just happy to be free of that job. The pawn shop owner went to prison for dealing in illegal Indian relics, I dunno what happened to the contractor though. Died alone and miserable likely, he was ripping off the few customers he had when I left him.
Reactions: CronoCloud Creeggan, Argent Stonecutter and GoblinCampFollower
Show hidden low quality content
You must log in or register to reply here.
Share:
Facebook Twitter Reddit Pinterest Tumblr WhatsApp Email Link
Top Bottom