Tigger said:
and whilst we are browsing the Metro, I have to say this new dads army remake is a bit crap.

Calling it ‘Operation White Cliffs’ the far right group focuses on the beaches of South England.

I like how they wear woodland camouflage pants, so nobody can see them on the beach.
Reactions: Maggy Hazelnut, Ava Glasgow, Rose Karuna and 4 others

Tigger said:
and whilst we are browsing the Metro, I have to say this new dads army remake is a bit crap.

Calling it ‘Operation White Cliffs’ the far right group focuses on the beaches of South England. 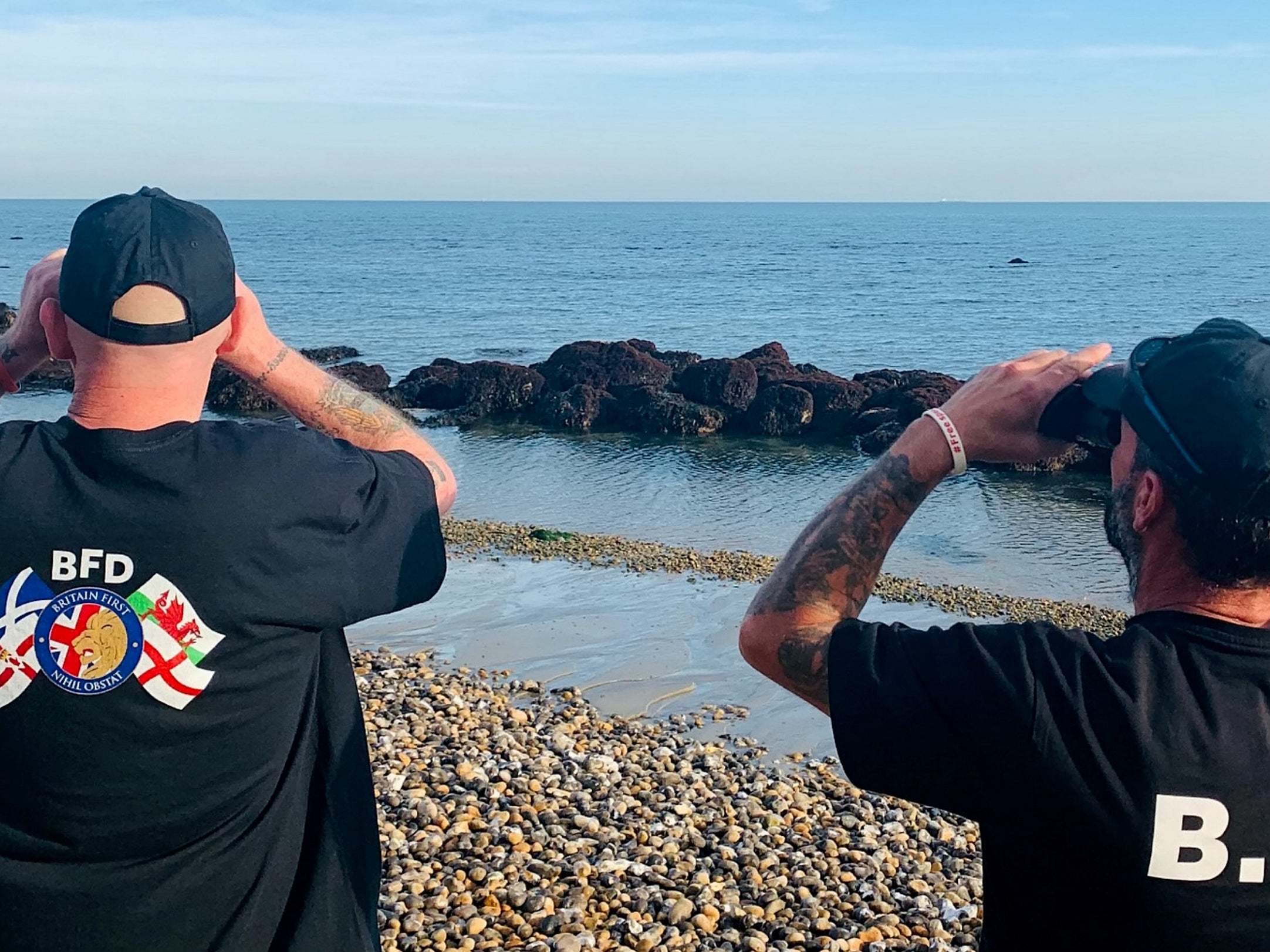 Unfortunately they can't do that to the right right loonies "patrolling" the border here. Those are 45's "second amendment people".

Yeah they'll just pretend to be scared for their lives and shoot you to death, and star in the next NRA Salutes True American Heroes commercial.
Reactions: Ryanna Enfield, Innula Zenovka, Katheryne Helendale and 1 other person

Meralyn Kirkland couldn’t believe what she was being told.

The caller on Thursday had a message about her granddaughter, Kaia Rolle. The 6-year-old had been arrested at her Orlando charter school and was going to be taken to a juvenile facility.

“I say, ‘What do you mean she was arrested?’ ” Kirkland told WKMG on Friday.

There was “an incident,” Kirkland recalled the caller saying — Kaia “kicked somebody and she’s being charged.”

The Orlando Police Department said it is now investigating actions taken by Dennis Turner, the school resource officer who arrested Kaia and an 8-year-old student in separate events on the same day last week. Turner is accused of not following the department’s policy regarding juvenile arrests and has been suspended from his duties pending the outcome of an internal investigation, Orlando Police Chief Orlando Rolón said in a statement to The Washington Post. According to the policy, any arrest of a minor younger than 12 needs approval from a supervisor, which police say Turner did not obtain.
Click to expand...

That guy sounds like someone who should've never been in that job...

Orlando police officer Dennis L. Turner arrested a 6 and 8-year-old in a school where he serves as a resource officer. He's been investigated, and arrested, for excessive force, and violence before.

Why aren't the grand stands in stadiums full anymore?

I ran across an article that says it's because players at NFL games were kneeling and it kind of pissed me off ( NFL viewership down and study suggests it’s over protests ) and I doubted that it was true so I did a bit of research and found that game attendance in all sports even NASCAR are down and stadiums are almost never full anymore (Keeping fans in the stands is getting harder to do). The yahoos who own the stadiums are speculating on why and trying to remedy it. Apparently in a vacuum.

"There are more firework nights, rock concerts and even religious nights in some parts of the country to bring people in," said Mark Conrad.

"It's more like a trip to Disneyland than a ball game," said Lee Igle. "The questions is, is this enough to bring fans in? Some that might just want to sit back and enjoy a game might think it's overload."
Click to expand...

Seriously? Have any of the stadium or sports team owners actually tried to attend a game like a fan would?

But even for people that can afford it, that's not the only problem. Stadium Bag Policy

Now, many stadiums are trying to eliminate Tailgaging (my favorite part of the game). It's just one hassle after another from trying to park to waiting in line for "inspection" and finally getting into your seat.

Basically you end up spending a ridiculous amount of money to put up with one hassle after another. When my husband and I saw the "no tailgating" and "clear bag" policy and learned we had to take our stadium seats and my purse back to the car, we did. And then we left without seeing the game we were so pissed. We haven't been back since.

Team and Stadium owners, do you want to know why fans have quit coming? It's because you're charging too much and have taken all the fun out of the game with all your crappy commercialism.
Reactions: Maggy Hazelnut, Brenda Archer, Dakota Tebaldi and 6 others

I checked the prices on there, and for the cheapest sport, baseball, in Atlanta, where I live, it's 4 times as expensive as going to a movie, and I think movies are too expensive. So no shit, I'm not going to a professional sports game. If I had an interest in sports (which I don't), I would go to the local school games, which the football and baseball fields are in the city park diagonally across the road from my house. We also have bike races and 5K runs up the road I can watch for free from my yard.
Reactions: Rose Karuna and Brenda Archer

Rose Karuna said:
Team and Stadium owners, do you want to know why fans have quit coming? It's because you're charging too much and have taken all the fun out of the game with all your crappy commercialism.
Click to expand...

An Indiana mother charged last week, along with her ex-husband, with neglect after allegedly relocating to Canada without their disabled 10-year-old daughter claims the girl was actually an adult, who deceived them about her age.

Kristine Barnett diverted the blame to Natalia, the child both she and her former husband, Michael Barnett, adopted from Ukraine back in November 2010, in an interview with Indiana station WISH-TV, calling the girl a grownup who was “a diagnosed psychopath and sociopath.”

The mother then told the station over Facebook that the adoption of Natalia was a “scam,” and she had been an adult “the entire time she’s known her,” WISH reported.

Natalia suffers from a form of dwarfism called Spondyloepiphyseal dysplasia congenita, which affects the bones and limits growth, according to the outlet.
Click to expand...

People often wring their hands and wander about how people get radicalised online. Well, I can't help feeling that part of the answer is displayed here:


In case you can't see. This demonstrates how, when left on 'autoplay' you tube selects increasingly radical and disturbing videos. In this example it moves from a documentary about rats, to a 2nd segment on rats, to a segment on garbage, to a segment "being overrun by illegal immigrants" and then vanishes down a fox news rat hole.
Reactions: Romana, Ryanna Enfield, Govi and 3 others

If this is true and the parents aren't just a couple of wackadoodles then it would make for an awesome Twilight Zone story!

Now this is a royal fuck up.

A doctor in South Korea is being investigated after allegedly performing an abortion on the wrong woman. The incident happened at a clinic in Gangseo District, Seoul, where a pregnant patient had visited to receive a nutritional shot on August 7. At the time, the woman was carrying a 6-week-old...
nextshark.com

According to the Gangseo police, the doctor and nurse in charge at the clinic claimed to have mixed up medical charts after failing to check her identity. The error eventually led to the woman’s infant getting aborted by mistake.

“The doctor and nurse have acknowledged their fault,” a police official was quoted as saying. The pair are now under investigation for negligence resulting in bodily harm. Local authorities announced the investigation on Monday.
Click to expand...

Autistic boy, 5, branded 'sexual predator' by school over hug and kiss with pals

Why is it that, in the US, the authorities so often treat children as if they were adults, and adults (particularly wealthy white male ones) so often behave like children?
Reactions: Rose Karuna, Katheryne Helendale, Ava Glasgow and 3 others

Autistic boy, 5, branded 'sexual predator' by school over hug and kiss with pals

Why is it that, in the US, the authorities so often treat children as if they were adults, and adults (particularly wealthy white male ones) so often behave like children?
Click to expand...

The sexual predator comment was from the boy's mom. She might be making things up. No mention of that in this ABC news story.