Nobody Cares about Tech Support Is Your Ex-Hotmail Inbox Over 15GB? Delete Your Emails or Pay Up, Says Microsoft

Microsoft is now enforcing a storage space limit that it forgot about for eight years.

Back in 2013 when Microsoft migrated Hotmail users over to Outlook, the transition came with a 15GB space limit. The problem is, the software giant never enforced this limit, meaning users could use more than 15GB without repercussion.

Now, Microsoft has caught on to this problem and is locking ex-Hotmail users to the original 15GB limit. This means that everyone who has allowed their email to overflow past this limit cannot send or receive emails.

Microsoft has sent an email to people with stuffed inboxes to notify them of this predicament. In the email, the software giant recommends that people start trimming down their inbox to get it back into shape.
Click to expand...

However, Microsoft is keen to let users know of a second way to free up space—one that will allow people to preserve their emails. If someone were to upgrade their Outlook account to a paid Microsoft 365 one, they would get more inbox space and free up their emails one more.
Click to expand...

There ain't no such thing as a free lunch. Forever. 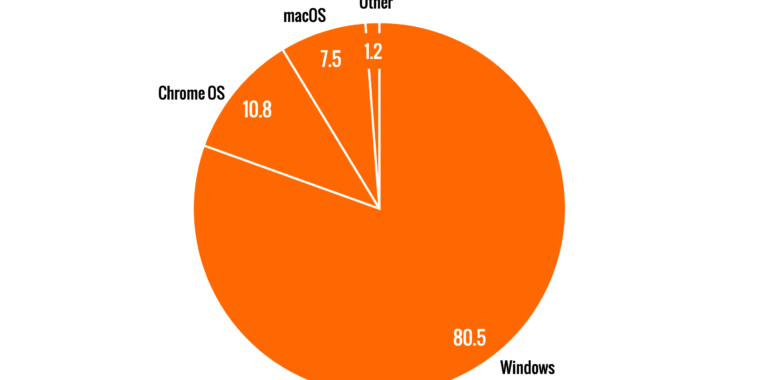 Chrome OS's rise in market share has been swift and decisive.

For ages now, every annual report on desktop operating system market share has had the same top two contenders: Microsoft's Windows in a commanding lead at number one and Apple's macOS in distant second place. But in 2020, Chrome OS became the second-most popular OS, and Apple fell to third.

That's according to numbers from market data firm IDC and a report on IDC's data by publication GeekWire. Chrome OS had passed macOS briefly in individual quarters before, but 2020 was the first full year when Apple's OS took third place.

Despite the fact that macOS landed in third, viewing this as an example of Google beating out Apple directly might not be accurate. Rather, it's likely that Chrome OS has been primarily pulling sales and market share away from Windows at the low end of the market. Mac market share actually grew from 6.7 percent in 2019 to 7.5 percent in 2020.
Click to expand...

Chrome OS's rise in market share has been swift and decisive.

I just picked up a chromebook yesterday, and it's surprisingly not bad. It's an HP x360. Hardware prices have exploded in the pandemic, but Chromebooks are still dirt cheap. I paid $300 for this one, but I could have gotten a comparable one for $200-250 with a smaller screen if I wanted.

The experimental linux vm is really nice. It's easier to download a .deb and install it on a chrome book than it is to do it on regular linux, at the command line. I thought installing VS Code would be a long adventure but it was easy. Installing firefox from a flatpak on the linux vm still required command line stuff, but it was a smooth process, and it runs great. The keyboard is taking some getting used to, but it's really not as bad as I thought it would be. I don't mind holding search key-backspace for delete, but the keyboard feels like it's too far to the right all the time for some reason.

I have run across one super weird problem, though... I don't know how to describe this well enough to search for answers, but the chrome browser does this on all YouTube videos: 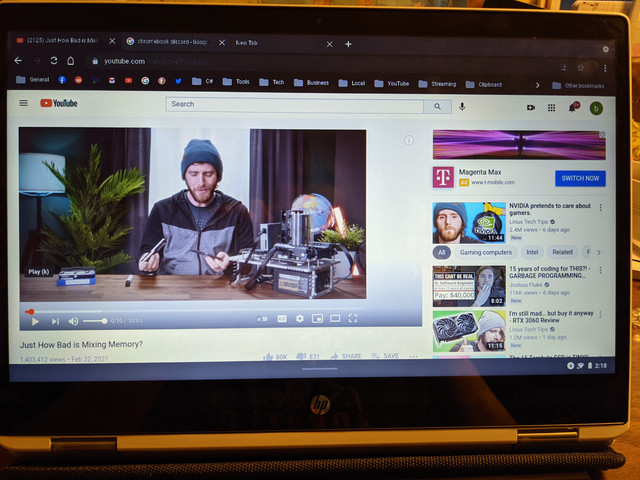 See how the video doesn't take up the entire space that videos are supposed to take up? That's the problem.

The video looks normal in full screen and theater mode. It only does this when I'm viewing a youtube video in regular video size mode. This only happens in tablet or presentation mode (when they keyboard is folded back), and the problem goes away if I leave my USB mouse plugged in while I'm in tablet or presentation mode. Also, it only happens when it's the chrome browser running on chrome OS. It's normal in firefox on Chrome OS, and in both firefox and Chrome in the linux VM. I tried disabling all my plugins and restarting Chrome in Chrome OS, but that didn't help.