The alleged ringleader of a plot to kidnap the governor of Michigan gathered several other men at his business. They...
talkingpointsmemo.com

Free said:
This is another "What's wrong with law "enforcement"" moment: Well, shoot! If Joe Q. Public can just go around and arrest people, what the hell do we need cops for?
Reactions: Rose Karuna, Aribeth Zelin, Ryanna Enfield and 3 others

Katheryne Helendale said:
Well, shoot! If Joe Q. Public can just go around and arrest people, what the hell do we need cops for?
Click to expand...

The average citizen, even militia members, lack the military hardware and grueling several weeks of training that allow police forces to issue the level of savage beatings and abuse of rights we have come to expect. You wouldn't want our quality of assaults to go down would you?? Not only that, there are simply not enough pseudo macho jobs remaining if we reduce the police force. There are not nearly enough openings as high school gym teachers and coaches to fit them in, and you wouldn't want them to be in any personal danger like a real soldier is...
Reactions: Rose Karuna, Katheryne Helendale, Aribeth Zelin and 4 others

Free said:
This is another "What's wrong with law "enforcement"" moment:

"Citizens arrest" means temporarily deputizing oneself until law enforcement can arrive and take over. It does -not- mean 'taking the accused off to a private location for an indeterminate amount of time and possible execution'. That sheriff needs to be voted out.

Also, in that line up of mug shots, the three obviously related guys in the upper right.... the one in the middle. "Hair plugs" much? Eww.

I'm also betting he's the ringleader of that cell, with his loyal nephewson and cousinbrother to his left and right. (ETA: my error, apparently lower row third from left was the alleged ringleader)
Reactions: Eunoli and Cindy Claveau

Dakota Tebaldi said:
I dunno, I just can't really agree with the distinction you make. Groups that call themselves militias here don't merely seek to usurp the state's legal monopoly on the use of violence. I mean, we're not talking about people who want to deputize themselves to go and say hunt down a serial killer because they don't believe the police are doing a good enough job. The violence that American "militias" threaten whether implicitly or explicitly, is invariably directed at the state itself. They believe their job is to capture and kill elected officials that they consider to have strayed too far from their specific ideal of what the government should look and act like. It's politically-motivated violence; I don't see how it could NOT be terrorism.
Click to expand...

JJ MacNab has views on the subject

LOL seriously it's like checking out the different facial-hair options in the character-creation screen
Click to expand...

Gaaah, this is why when I see a man with a beard, I see someone who probably hates what I am. Thanks a lot Duck Dynasty, Bearded Vape Culture, and Vikings! For giving us a bunch of right wing whackjobs trying to get in touch with the evropan masculinity nordic warriors inside. I can just imagine those guys being MGTOW Incels going on how they're going to get some Russian internet-bride tradwife.

Fuck that Bragman fellow, that guy has a Confederate flag...in MICHIGAN. And those are two VERY nice trucks. And he owns, doesn't rent. It may not look like a house in the Hamptons, but that militia dude is NOT poor.


Free said:
This is another "What's wrong with law "enforcement"" moment:

GAAAAH. perhaps the Sheriff should be investigated to see if he's had contacts with any of the militia. Because NOTHING Gov. Whitmer has done is a crime. These militia dudes mentioned trying her....themselves or perhaps just killing her outright That's not law-abiding behavior, that's murderous vigilantism.

Innula Zenovka said:
Analysis of the indictment by someone who studies Militias and other extremist groups for a living

When watching news items about US militias and Second Amendment guys, I'm often struck by how horrid their beards are -- it's as if they deliberately try to weaponize ugly beards or something.

I mean, how often do you see a Sikh with a bad beard?
Reactions: Ellie, Kalel, Rose Karuna and 6 others

Also, they were planning on kidnapping her across state lines - which makes it certainly federal....
Reactions: Rose Karuna, Govi, Katheryne Helendale and 3 others

Katheryne Helendale said:
Well, shoot! If Joe Q. Public can just go around and arrest people, what the hell do we need cops for?
Click to expand...

Jolene Benoir said:
MY Justice Dept....Um, it was the FBI that thwarted this plot. He, nor HIS Justice Dept likely had a damn thing to do with it. Furthermore, the FBI is an agency in which he is attempting to also take full control.
Click to expand...

Technically, the FBI is under the Justice Department.

A Wichita man has been arrested on suspicion of threatening to kidnap and kill Wichita Mayor Brandon Whipple over frustrations with the city’s mask ordinance, the mayor and police said Friday afternoon.

Meredith Dowty, 59, was booked into Sedgwick County Jail at 6:05 p.m., Friday, booking reports show. Police confirmed he is the suspect and said he could face a charge of criminal threat.

Whipple said he had been read a series of text messages received by another city official that asked about Whipple’s address and contained a detailed threat against his life.
Click to expand... 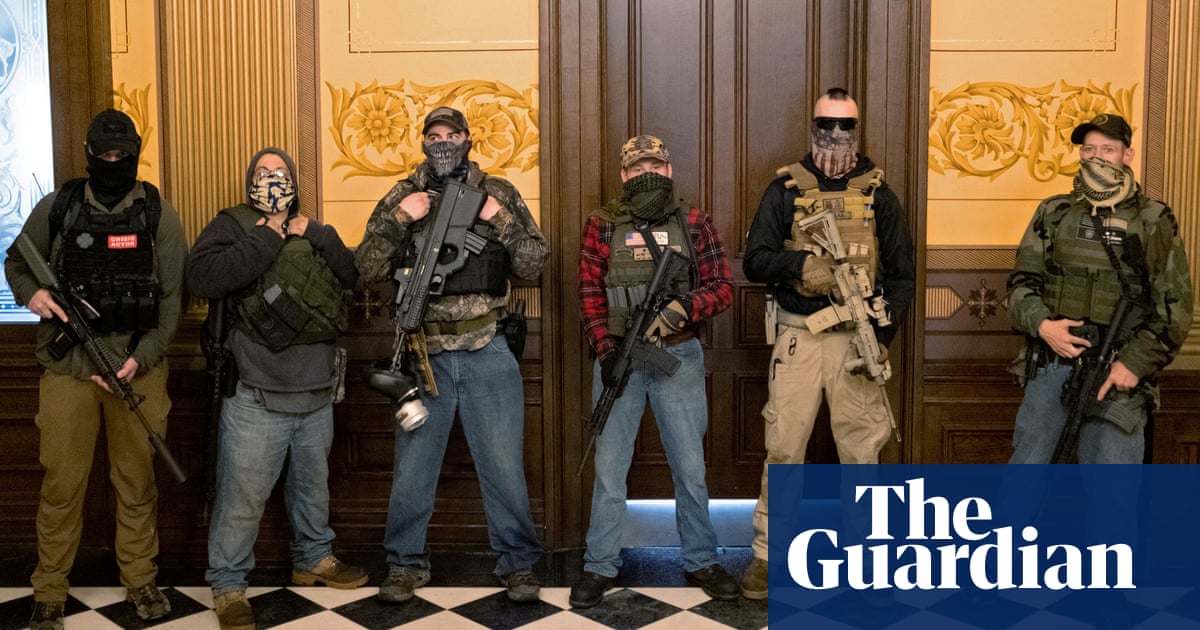 'It is serious and intense': white supremacist domestic terror threat looms large in US

From the frequency of attacks to the scope of ambition, racist terror groups – encouraged by the president, are showing unparalleled activity in the modern era

One arrested in threat to kidnap and kill Wichita mayor over COVID-19 mask mandate
Click to expand...