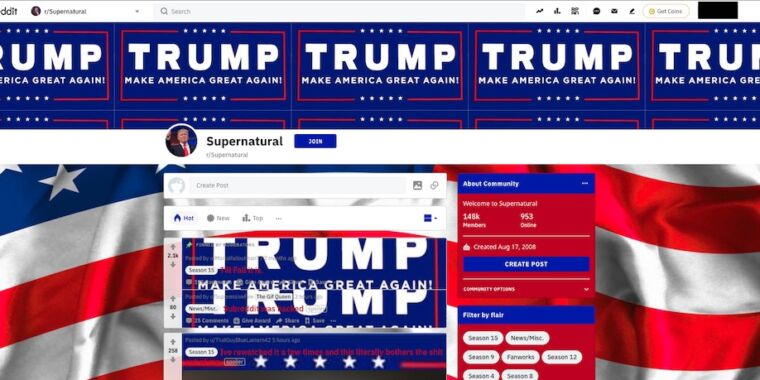 Dozens of discussion groups on Reddit—including those dedicated to the National Football League, the San Francisco 49ers, and the Gorillaz—were hit in a Friday morning mass takeover spree that used the subreddits to spread messages promoting President Trump.

The hijacked accounts had tens of millions of combined members. The 148,000-member subreddit Supernatural, dedicated to the TV show by the same name, was emblazoned with pro-Trump images and slogans. Reddit personnel have since restored the moderator account to its rightful owner. The image above is how the subreddit appeared when the takeover was still active. The takeovers came five weeks after Reddit banned include /r/The_DonaldReddit banned include /r/The_Donald, a leading forum for fans of the president, and hundreds of other unrelated subreddits for violating recently rewritten content rules.
Click to expand...