Marcel's Is Back! Re-Opening Party 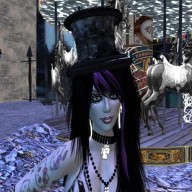 Some of you may know that due to a technical glitch (not my fault!), the entire club house (and all the surrounding area) were returned off the sim a couple of weeks ago.

I've been frantically hammering and decorating away and our new and improved Marcel's is now ready for action! We've also moved sims so there will be a new landmark to follow on Friday.

I've decided to open the club with a tribute to an incredible (but hardly known) musician who passed away recently.

Hal Blaine was an American drummer and session musician estimated to be among the most recorded studio drummers in the history of the music industry, claiming over 35,000 sessions and 6,000 singles. His drumming is featured on 150 US top 10 hits, 40 of which went to number one, as well as many film and television soundtracks. Seriously - this dude quite literally drummed every single hit track from the late 50s into the 70s.

A fantastic set to celebrate our shiny new home.