I'd assumed that, whatever the British Government said, things were going to get worse as soon as the schools started back, but this is bloody ridiculous 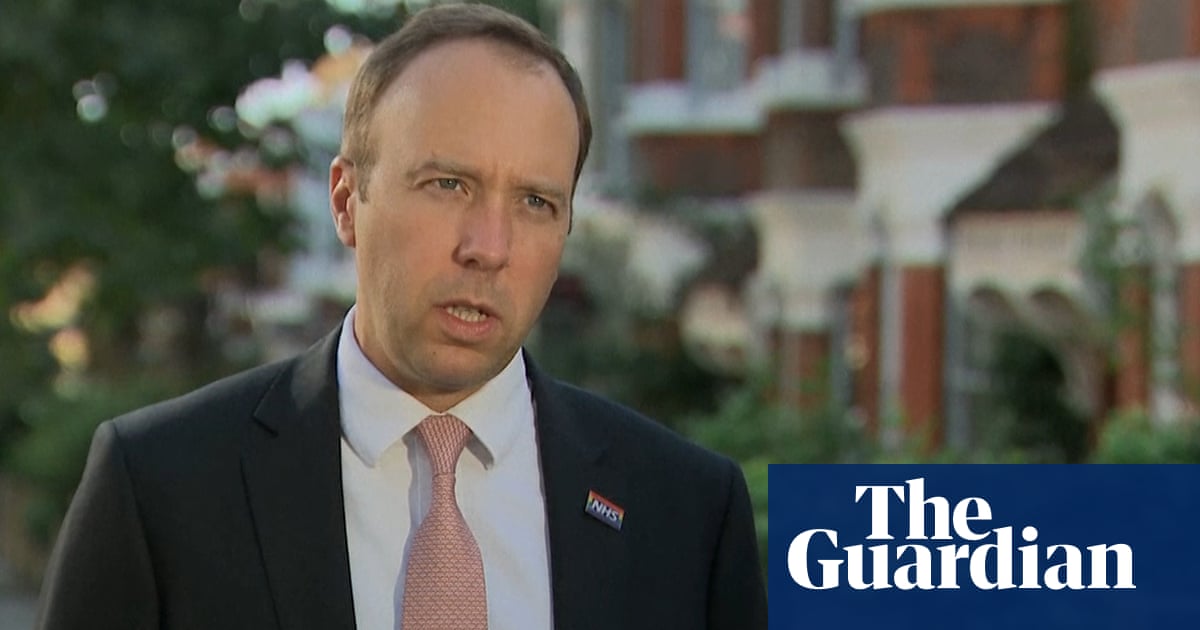 
This is probably because the increase in cases has mostly been among YOUNG STUDENTS, who aren't dying off due to the virus as much as the older folk. Meanwhile, the total is +190k and counting.
Click to expand...

We're at less than 1k deaths per day now? Oh, cool! We can now go ahead and open everything back up and go completely back to normal!

Yes, I'm being sarcastic. But there are people around here who seriously think that! On my way out of the grocery store parking lot earlier today, I drove by a covered table with a bunch of people around it - none of them wearing masks - who were signing petitions to recall our governor because of the state shutdown.

Workers Reveal Disney Is Covering Up Its COVID Cases

Workers and their worried spouses reveal to The Daily Beast that Disney is not only underreporting its COVID cases but clearing COVID-positive employees to return to work.

Four sources familiar with the matter told The Daily Beast that Disney has kept the total number of positive cases at the district under wraps, alerting unions only to the positive test results of their members—often days after the fact, risking further exposure—and leaving workers to guess for themselves why colleagues disappeared for days at a time, or why 11 people from the 12-person Horticulture Irrigation team didn’t show up to work for a full week.

“We want to know if any cast members have tested positive. But Disney has taken the position that they’re only going to tell us if our cast members do,” said Matt Bell, a spokesperson for UFCW Local 324, one of a dozen unions representing workers, or “cast members,” at Disneyland. “What is supposed to happen is contact tracing—find out who was exposed and quarantine them as well. I can’t confirm that they’ve done that.”
Click to expand... 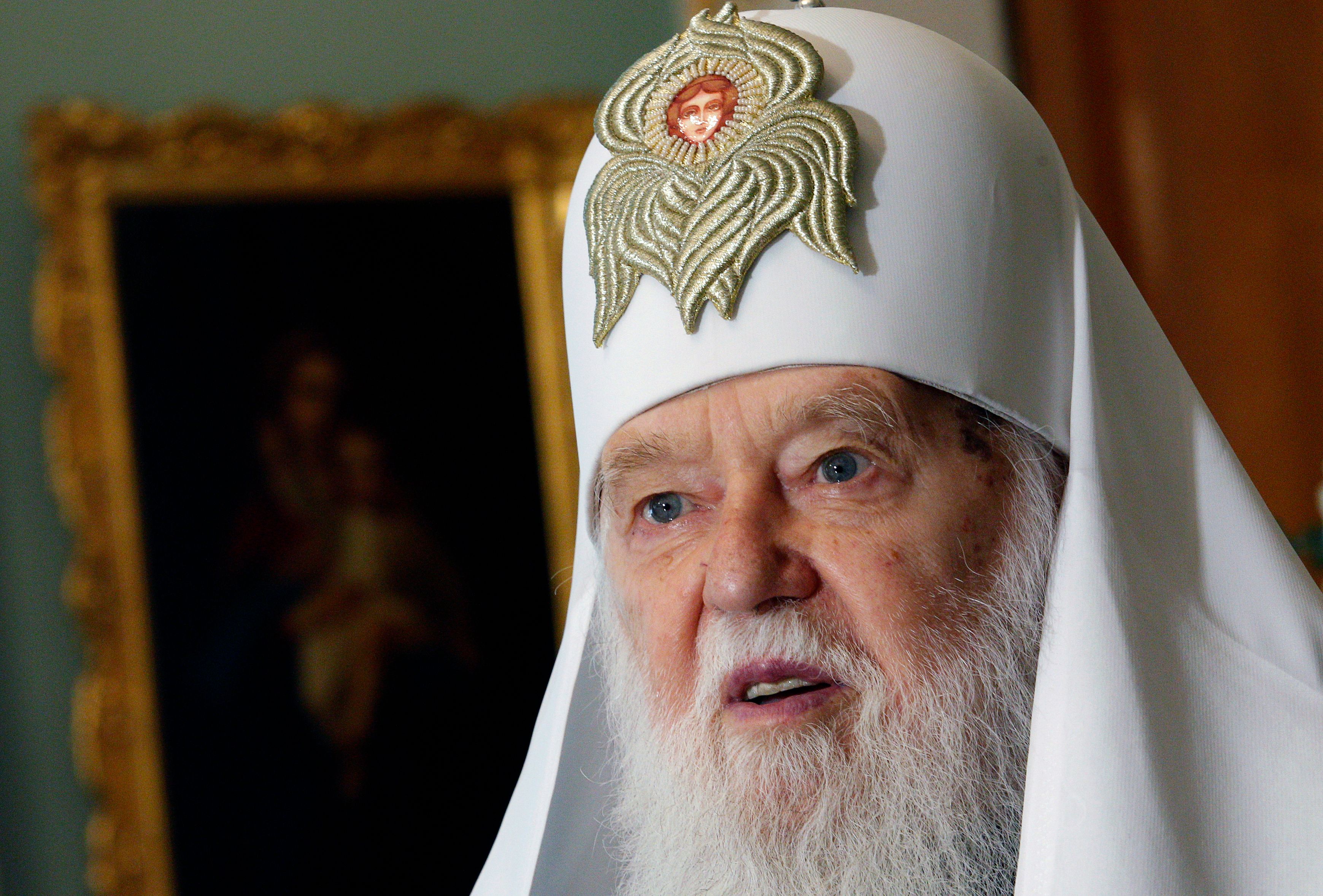 Ukraine's Patriarch Filaret is recovering in hospital after previously blaming the virus as "God's punishment for the sins of men."

A leading church figure in Ukraine who previously described the coronavirus outbreak as "God's punishment" against gay marriage has contracted COVID-19.

Patriarch Filaret, leader of the Ukrainian Orthodox Church of Kyiv Patriarchate, is in a stable condition in hospital after it was announced on September 4 that he had contracted the virus.
Click to expand...

Hmm, I wonder what God is punishing him for...
Reactions: Katheryne Helendale, CronoCloud Creeggan, Isabeau and 1 other person States, cities, and pharmaceutical companies are contradicting or ignoring the Trump administration in responding to COVID-19 as the White House...
talkingpointsmemo.com

States, cities, and pharmaceutical companies are contradicting or ignoring the Trump administration in responding to COVID-19 as the White House continues to push for responses that could help the President politically while undermining the country’s ability to fight the pandemic.

The Trump administration has issued directives and statements in recent weeks that appear aimed at boosting the President’s chances of re-election, be it predictions of a vaccine in time for Nov. 3, or a change in CDC guidance that, if followed, would reduce the volume tests, resulting in the appearance of fewer cases.

But the administration’s ongoing battle against the political impact of COVID-19 —rather than the disease itself — has lowered confidence in the country’s public health agencies. The loss of influence has meant that states and local governments are far warier of federal public health advice.
Click to expand...

Thread from a parent assisting a Zoom 2nd grade class

The economic collapse of the service based economy. Here in Florida, within miles of where I live, it is horrible.

The 17-year-old slammed her door and cranked the air conditioning as high as it would go, hoping that a final blast of cold air might make the 95-degree day more bearable. She then headed outside to the motel’s overgrown courtyard, a route that took her past piles of maggot-infested food that had been handed out by do-gooders and tossed aside by the motel’s residents. Several dozen of them were gathered by a swimming pool full of fetid brown water, trying to figure out their next move.

The motel’s owner had abandoned the property to its residents back in December, and now the fallout from the coronavirus pandemic was turning an already desperate strip of America — just down the road from Disney World — into something ever more dystopian. The motel’s residents needed to pay the power company $1,500.

The aging motels along Florida’s Highway 192 have long been barometers of a fragile economy. In good times they drew budget-conscious tourists from China, South America and elsewhere, whose dollars helped to pay the salaries of legions of low-wage service workers; the people who made one of the world’s largest tourism destinations — “the most magical place on earth” — run.

In tough times, the motels degenerated into shelters of last resort in a city where low-income housing shortages were among the most severe in the nation and the social safety net was collapsing. Now they were fast becoming places where it was possible to glimpse what a complete social and economic collapse might look like in America.
Click to expand...

It's a long article but a worthy read. Minimum wage is just not cutting it for people who live in places like Florida and California. We seriously need a higher minimum wage and more affordable housing.
Reactions: Archer, Katheryne Helendale, Ryanna Enfield and 5 others

Rose Karuna said:
The economic collapse of the service based economy. Here in Florida, within miles of where I live, it is horrible.

It's a long article but a worthy read. Minimum wage is just not cutting it for people who live in places like Florida and California. We seriously need a higher minimum wage and more affordable housing.
Click to expand...

Yup, when the minimum living wage in my part of Florida is 17$ an hour, 15 is a slap, and I live in one of the cheapest areas of the state. We need a minimum wage that is a living wage index, so that there is no benefit to corporations to jack their prices because then they have to pay more per hour. At least, this is what it seems to me - I'm not an economist, even if I did well in the basic one I needed for a degree I never got...
Reactions: Katheryne Helendale, Ryanna Enfield, CronoCloud Creeggan and 1 other person

Rose Karuna said:
The economic collapse of the service based economy. Here in Florida, within miles of where I live, it is horrible.

It's a long article but a worthy read. Minimum wage is just not cutting it for people who live in places like Florida and California. We seriously need a higher minimum wage and more affordable housing.
Click to expand...

School districts run by idiots who think this kind of crap is 'okay' is why our electorate is too dumb to understand why voting for Trump is an act of self-harm.
Reactions: Govi, Aribeth Zelin, Archer and 4 others

What the actual f...??? There is so much wrong with this idea, it's not even funny! First, they're moving around every 12-14 minutes. How is this not disruptive to the learning environment? Second, they're still in the same cramped classroom breathing the same air. Third, the desks and seats would have to be disinfected after each move, making an already disruptive process even more disruptive. There's more, but it's late and I'm tired. All I know is, whoever came up with this cockamamie idea needs to be fired and to never be allowed to be in charge of children or of education ever again!
Reactions: Maggy Hazelnut, Ryanna Enfield, Aribeth Zelin and 1 other person The brother of Jeremy Corbyn is being blamed for a feud in the ranks of Britain’s coronavirus deniers and conspiracy theorists.Leading figures in a movement that rejects vaccines, masks and lockdowns

More about Ms Shemirani and Mr Mr Steele, the organisers of the rival march to that organised by Messrs Corbyn and Icke (yes, the lizard man) 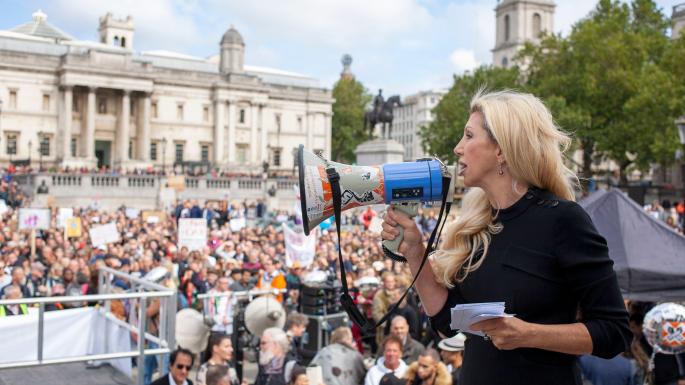 A suspended nurse is the new face of the antivaccination movement as Britain becomes a hub of coronavirus conspiracy theories.Kate Shemirani, whose Twitter following has trebled in the past three

Ms Shemirani has been suspended for 18 months by the NMC to avoid the risk of harm to the public. At her interim regulatory hearing in July she was represented by Mark Steele, a rabid campaigner against 5G phone masts.

At the hearing, Ms Shemirani and Mr Steele appeared outraged that the panel did not want to hear their antivaccine and 5G “facts”. Mr Steele accused the NMC of being complicit in genocide.

She said nurses who made accusations against her did so because they were overweight and jealous. “We all know what women can be like,” she said.

“The fact that I was always graced with decent looks and I’m always very slim and I’ve been very successful has generated a little bit of jealousy throughout my career.” She told The Times that she had now resigned as a registered nurse.

Mr Steele was fined £180 in 2018 for threatening two councillors in his native Gateshead, near Newscastle, where he claimed that the council was equipping street lights with technology which caused cancer and microwaved babies in their beds.
Click to expand...