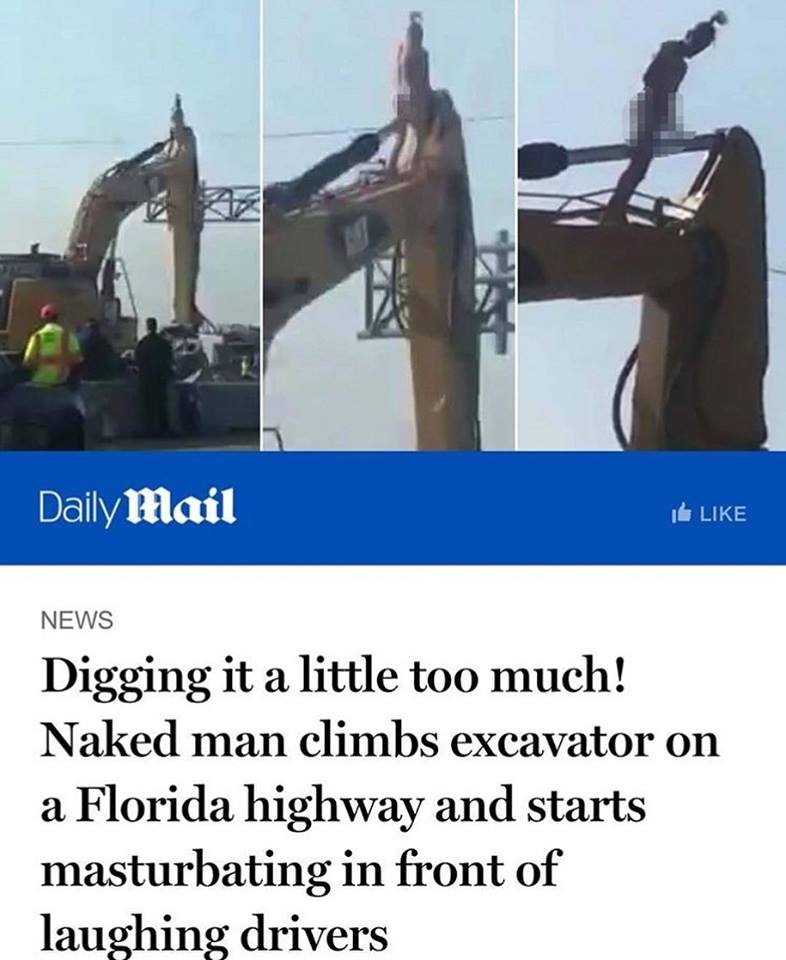 Is It Okay to Laugh at Florida Man?
What it’s like to go viral as one of the Internet’s biggest memes — and the moral complications of laughing along.

I've used up all my Washington Post reads so I can't read the article. That said, I'm probably not going to stop laughing. Let's face it, food fights, publicly naked people, frisky seniors, angry squirrels and just the crazy ass shit that the extreme heat drives us to here in Florida is kind of funny. Also, the craziness seems to cover all levels of income, you will find just as many country club assholes wrestling alligators for their girlfriends as you do poor folk.

How can anyone not laugh at this? https://floridaman.com/dressed-as-spider-man-spotted-power-washing-roof/

Yes, some of the shit people do here is both crazy and tragic. I don't laugh at the tragic stuff, but damn, there is enough other stuff that is not tragic to keep a comedian going for life.

Florida is just a magnet for weirdness.
Reactions: Maggy Hazelnut, Dakota Tebaldi, Katheryne Helendale and 2 others There were no reports of milkshakes bringing any boys to the yard, but a fracas at a Florida Five Guys did bring cops to the restaurant — and five guys were arrested.

During an argument Thursday between Kimberly Jean Carroll, 55, and her boyfriend over his style of slicing during dinner, she punched him in the face and then spit at him.

It's not known what kind of cutting method the boyfriend used to make Carroll so upset.

The boyfriend declined medical treatment, but Carroll was booked on a misdemeanor domestic battery charge, according to The Smoking Gun.
Click to expand...

I cut in the European style mainly because I was taught that way of course; but I've seen the American style and for the life of me I can't imagine what they were thinking when they invented that. The way you have to put down the knife and switch the fork from your "cutting hand" to your "eating hand" every single time you cut a piece of meat - it's like you're constantly interrupting your meal over and over again.
Reactions: Rose Karuna, Govi and Brenda Archer

As usual, "because reasons."

Hmmm. To be fair, I don't load non-cut food onto the back of the fork; I have no problem turning it inside-up for that. But it still stays in my left hand while I do that.

I will put my knife down and use a spoon for impractical-to-fork stuff like rice or corn, but my fork still doesn't leave my left hand.
Reactions: Kalel, Ashiri and Brenda Archer

I eat my peas with honey,
I've done it all my life.
It may taste kind of funny,
But it keeps them on my knife.
Reactions: Fionalein, Rose Karuna, Brenda Archer and 2 others

The idea of placing loose items on the back of the fork seems very odd. Must be an 'upper class' thing.

I've never seen it, but I will use what that Wikipedia article calls the "hybrid style" to work through a large piece of meat, and then go back to "American style" which is the only one I've ever seen older people use. I think I'd have some difficulty if I tried balancing anything on the back of the fork.

my mom and lots of older Caribbean people use this style.. it's considered prim and proper etiquette

since i grew up in the US gave up on trying to teach me as i was "too americanized"
Last edited: Jul 31, 2019
Reactions: Beebo Brink, Brenda Archer and Dakota Tebaldi

A new study looking at Florida alligator bite reports dating back to 1971 concludes that gators mostly bite adult men who are not tourists. Adult men in this category make the mistake of getting too close — or even getting into — small, man-made bodies of water where the prehistoric lizards like to hang out, generally in the summertime.

There's a good reason for that distinction, explained state biologist Allan Woodward, one of the study's authors: “Florida has over 90 percent of all the bites in the United States.”

Less surprising was that one third of the bites were connected to people feeding alligators, so that the gators began to associate people with food. For instance, in 2012, an Everglades airboat tour captain who lured gators close to his boat by feeding them marshmallows, discovered that gators tend to bite the hand that feeds them. He lost his. <---- I met this guy (seriously) when I took my Dad out on an airboat ride)

As a Times story on the incident noted, “You get mugged in Manhattan. You lose your loot in Vegas. In Florida, the foolish and unlucky wear empty sleeves.”

Males were more frequently bitten than females, and by a large margin: 81.4 percent to 18.5 percent, In other countries, the number of women bitten by crocodilian creatures is much higher, Rosenblatt said, mostly because women tend to be the ones washing clothes or bathing children by the reptile-inhabited river.
Click to expand... 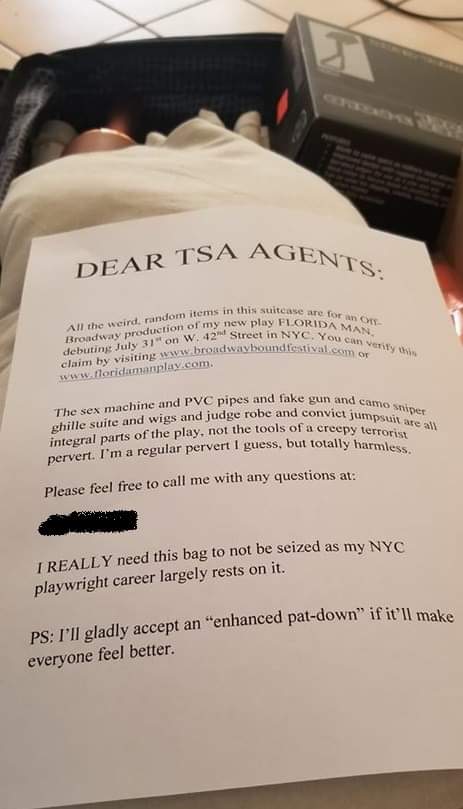 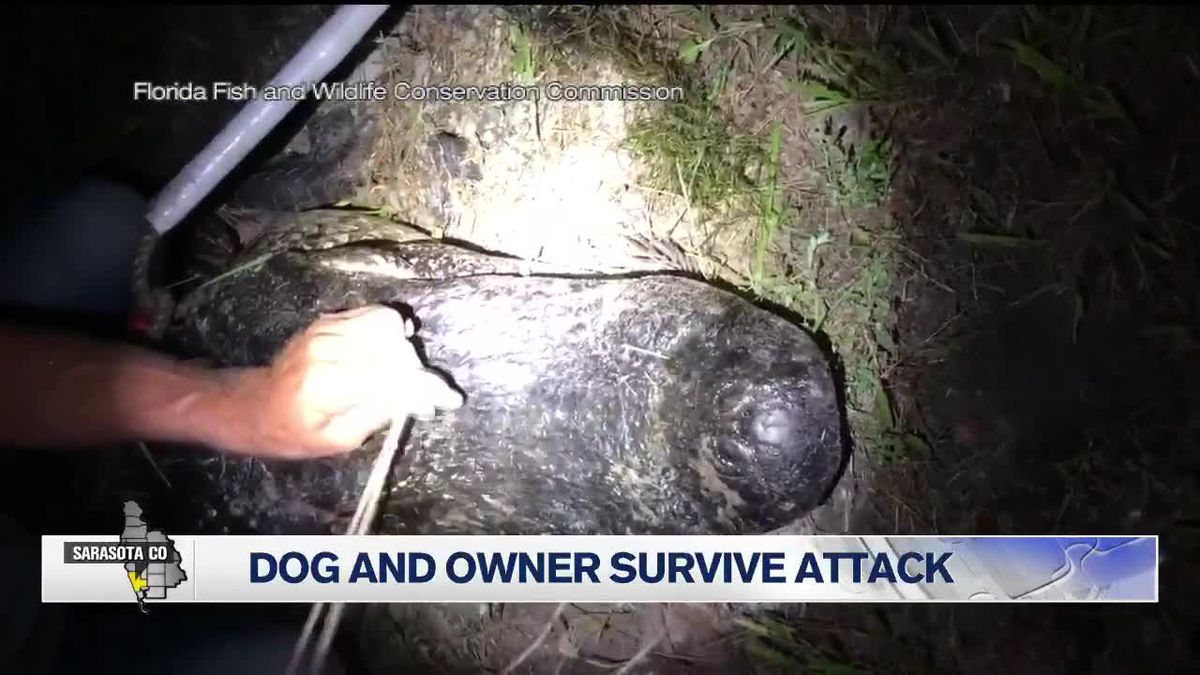 The man rushed outside to find his dog in the canal with an alligator. Without pausing, the man jumped into the canal and pried open the gator’s jaws to rescue his dog, pulling the dog to safety.
www.mysuncoast.com
Reactions: Maggy Hazelnut, Brenda Archer and Govi

Ummm ... is that an alligator in your yoga pants or are ya just glad to see me?

UNTA GORDA, Fla. — Officials say a Florida woman pulled a small alligator from her yoga pants during a traffic stop and illegally possessed numerous other wild animals has been sentenced to probation after pleading guilty to four charges.

Florida prosecutors say a Charlotte County sheriff’s deputy stopped a pickup truck in May after it ran a stop sign. The driver, 22-year-old driver Michael Clemons, told the deputy he and his 25-year-old passenger, Ariel Machan-Le Quire, were collecting frogs and snakes under an overpass. He gave the deputy permission to search bags in the truck.

When the deputy found 41 3-stripe turtles in a “Teenage Mutant Ninja Turtle” backpack, he asked if Machan-Le Quire had anything else. She pulled the 1-foot (0.3-meter) gator from her pants.
Click to expand...

Rose Karuna said:
Ummm ... is that an alligator in your yoga pants or are ya just glad to see me?

Rose Karuna said:
Ummm ... is that an alligator in your yoga pants or are ya just glad to see me?

Floirda Man: Does something ridiculously stupid