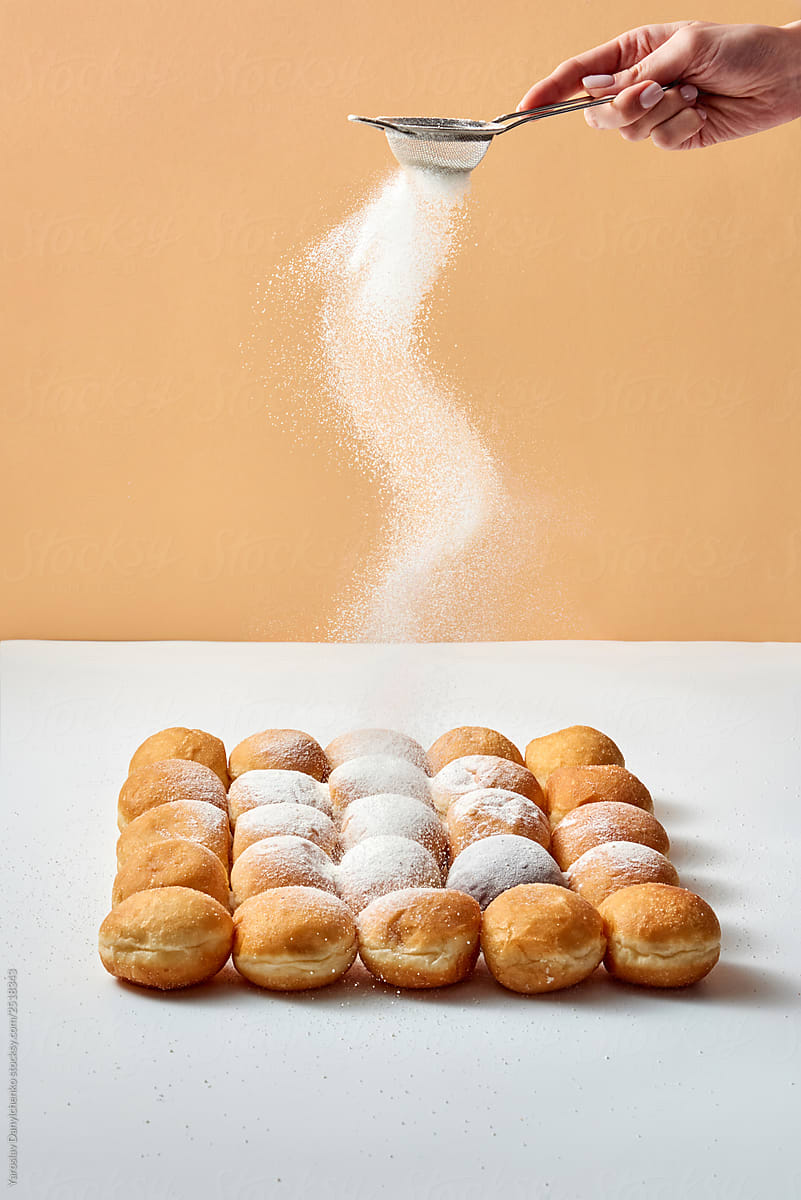 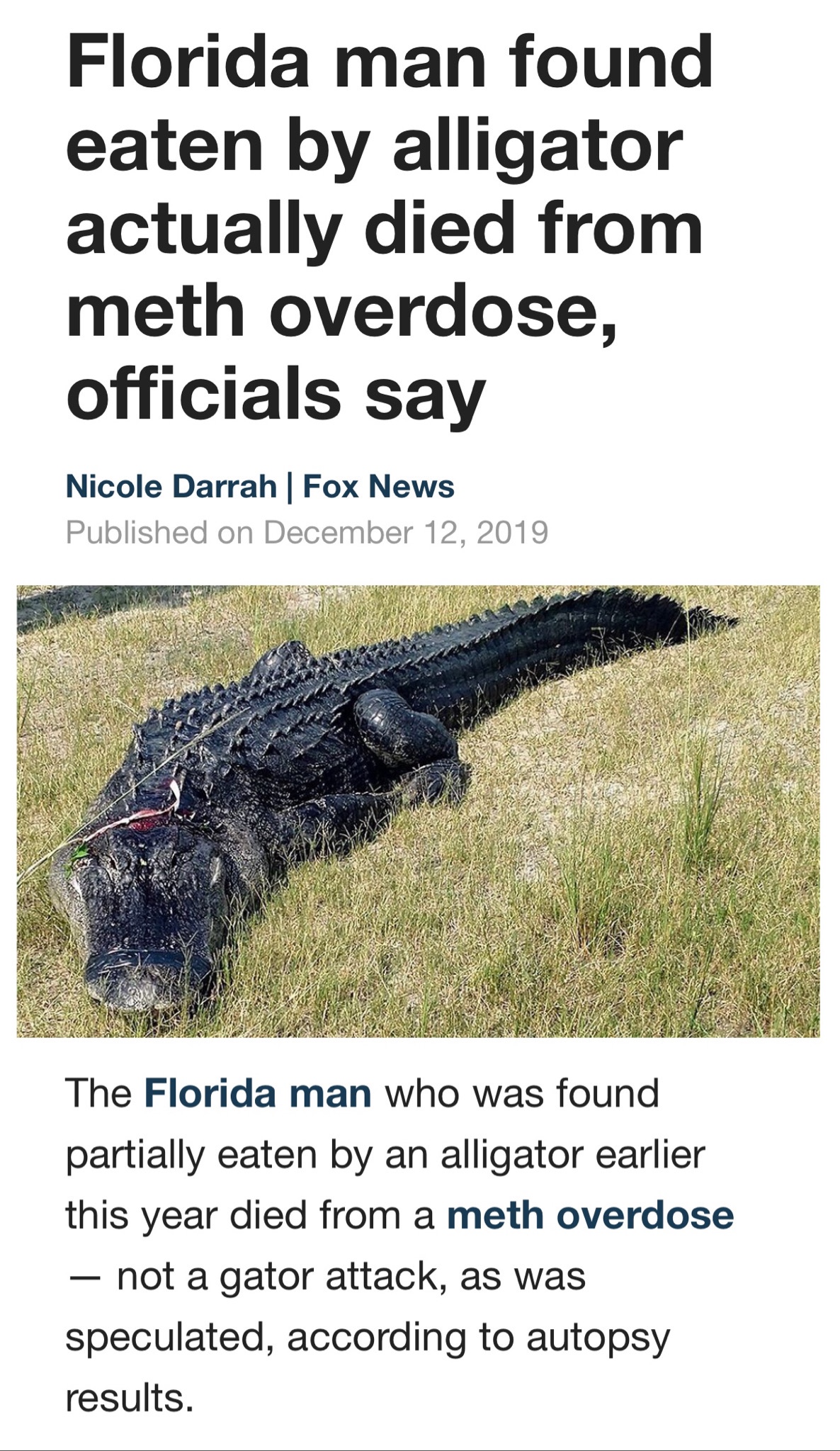 There you have it.
Reactions: Romana, Brenda Archer and Clara D.

This is why the alligators here are so damn mean and fast.

Rose Karuna said:
This is why the alligators here are so damn mean and fast.
Click to expand...

Long way to travel for a hate crime. 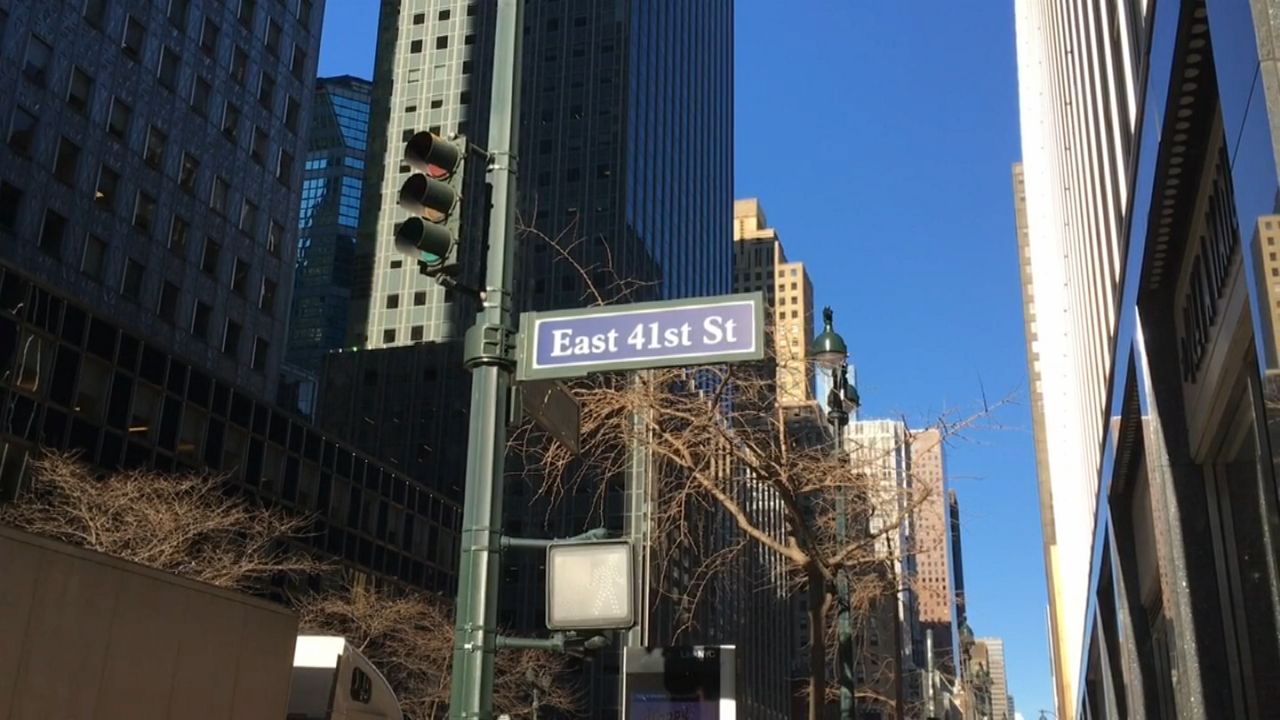 The victim was attacked on the first day of Hanukkah.

Free said:
Long way to travel for a hate crime.

The victim was attacked on the first day of Hanukkah.

Maybe he was afraid Miami Jews would be armed? 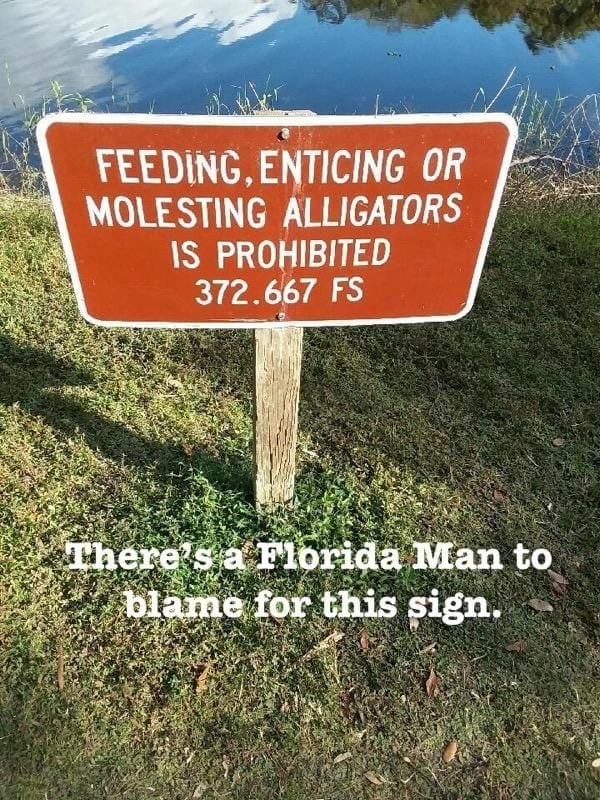 In Florida, 2019 was the Year of the Exploding Toilet

As always, Florida animal stories were more exciting than any episode of TV’s Wild Kingdom. A dog in Port St. Lucie somehow got behind the wheel of a car and knocked it into gear, so it circled a cul-de-sac for an hour — backward. In August, a surfer in New Smyrna Beach leaped off his surfboard and landed on a shark. Two months later the same thing happened at the same beach with a different surfer.

Iguanas became such a menace that the state wildlife commission encouraged everyone to shoot them on sight, then had to backpedal when a trapper trying to shoot one with a pellet gun accidentally hit a Boca Raton pool boy in the leg.

Florida’s best wild animal story happened in August when a Charlotte County deputy stopped a couple in a truck for running a stop sign. The deputy discovered the woman’s Teenage Mutant Ninja Turtles backpack contained 41 three-stripe turtles — a big no-no. The deputy asked if she had anything else she shouldn’t have. She pulled a foot-long alligator out of her yoga pants. (This later led to the arrest of two Fort Myers men for illegal wildlife smuggling.) <--- she had an actual alligator. Stuffed in her yoga pants? What the f#@kety f#@k? LMAO she must have drugged that gator because not only do they bite but they'll scratch the piss out of you.

Also the various ways people find of having public sex here makes me LOL: A Nassau County couple arrested for drunken driving on a bicycle were put into a police cruiser in handcuffs, yet somehow stripped naked and had sex. Love will find a way!
Click to expand...

I can only imagine what the group W bench occupants were thinking about these two.

Truly 2019 was the Florida gift that kept on giving.

For anyone that needs a good belly laugh. "Naked Came the Florida Man". by Tim Dorsey.

His books are awesome, I've read them all. I reserve them for when I'm really feeling like I want to put my fist through a wall. Their insanity keeps me sane in an insane world. Serge Storm Rocks!
Reactions: Govi, Grandma Bates, Fionalein and 3 others

In Florida, 2019 was the Year of the Exploding Toilet

I can only imagine what the group W bench occupants were thinking about these two.

Truly 2019 was the Florida gift that kept on giving.

Must be immigrants from Germany those Florida Men...

I got instantly reminded of this one:
German Man trying to unclog toilet with bird repellant explosives...

Fionalein said:
Must be immigrants from Germany those Florida Men...

I got instantly reminded of this one:
German Man trying to unclog toilet with bird repellant explosives...

OK - I kid you not, there used to be a radio show in Florida hosted by Adam Corolla where listeners would call in and read some weird story of the day and the hosts had to guess if it happened in Florida or Germany.

MIAMI – A Florida man has been arrested after he allegedly climbed a traffic light on a busy intersection and began sh*tting on cars passing underneath.

Roy Stern was arrested by Miami police after numerous calls about a man hanging from a traffic light and sh*tting on cars. Police and the fire department had to bring Roy down via ladder. According to authorities Roy was high on crystal meth and marijuana.
Click to expand... 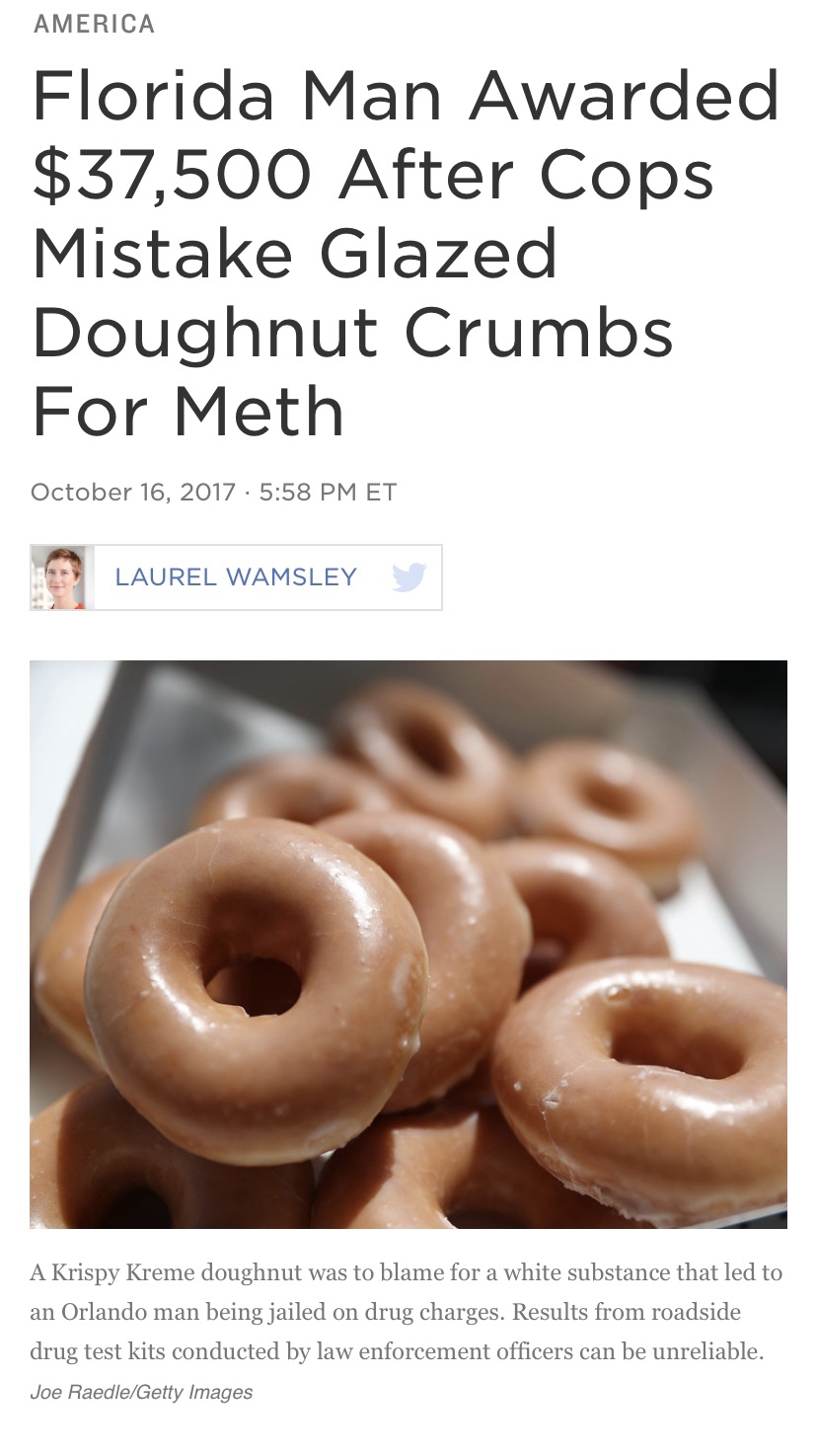 Ok, so not only are a large portion of the population in Florida badly behaved and weird as hell but apparently, the bears are too. (I learned this because I've just moved into bad ass bear central).

And they can be very ill-mannered. People have reported bears crashing through pool screens; wrestling on lawns; stealing Halloween candy; passed out in front yards; sitting on cars; plowing through the trash; and raiding freezers of hams, turkeys, even Popsicles and leftover birthday cake.
Click to expand...

Five times in 15 months, Sandra Sheppard has called state wildlife officials about a bear loitering near her home on Blue Iris Place, just east of Wekiwa Springs State Park. The bear, which stands 7 feet tall on its hind legs, pushed through the screen surrounding her lanai and helped itself to about 18 cans of Coors Light from a poolside bar fridge.
Click to expand...

My husband was checking the electrical and we noticed several trees wired for 110 and though "what the hell" and of course, ended that. Problem is, I saw a small bear wandering around the neighbors front yard last night and after reading this, now I'm wondering if that was such a good idea.

Not only do we have to contend with badly behaved, naked, drunk bears, we also have a problem with both wild boar and armadillos.

Makes me wonder if my poor bees will have a chance.
Reactions: Isabeau, Govi, Brenda Archer and 1 other person

Days can be really boring in some of those senior communities and when a toad comes along, well, a little "trip" can liven things up a bit.

OTOH "toe sucking" is frowned upon. (Unless you live in "The Villages).

Personally, I'd rather suck the toad.
Reactions: Isabeau and Brenda Archer

I saw this and before looking at the location immediately KNEW it HAD to be Florida. Sure enough, it's Winter Haven.

Stealing a TV in hover shoes is definitely a first!

Classiest theft ever, dude just glides right out the door with the merchandise.

Not that I approve of stealing from anyone but damn, if you're going to do it, do it big or do it in style. This guy has style.
Reactions: Essence Lumin, Brenda Archer and Tirellia

With regard to cold days...