Brit teen blind from a diet of potato chips and fries 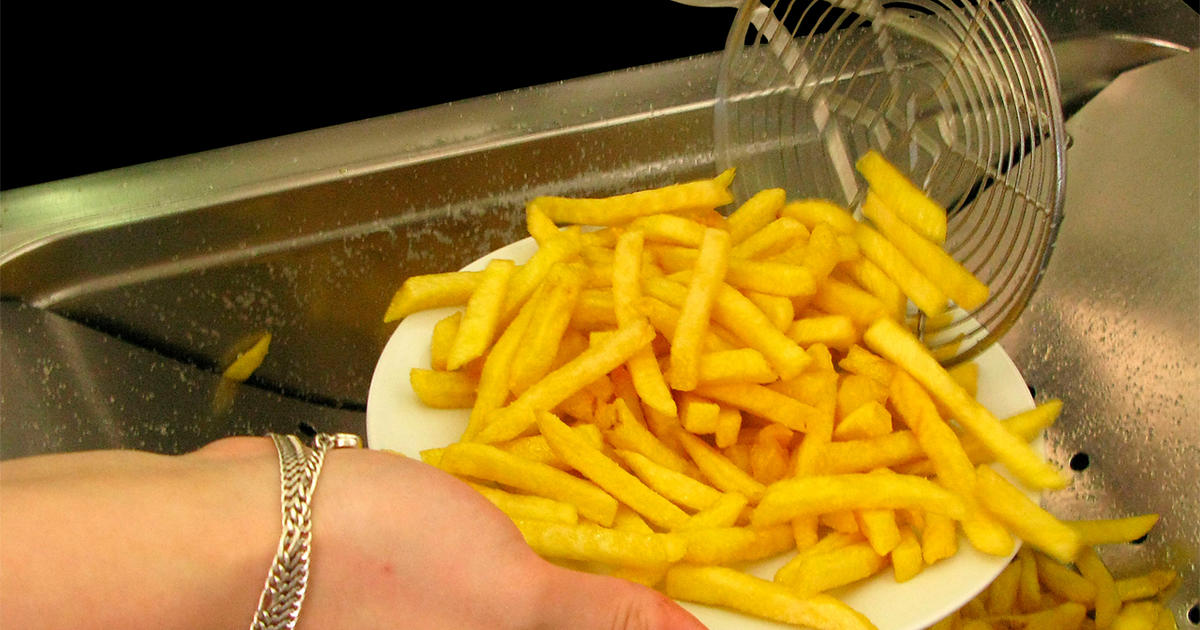 British doctors cite case of boy in England to warn that poor nutrition can permanently damage vision, along with everything else

An English boy who eats nothing but French fries, potato chips and the occasional piece of ham has been left blind due to the extreme vitamin deficiency in his diet, doctors in Britain said in a report published Tuesday. One of the doctors behind the article in the Annals of Internal Medicine personally treated the "fussy eater" from Bristol over the course of three years, and said he was previously healthy and took no medicines.

"His diet was essentially a portion of chips (fries) from the local fish and chip shop every day," the doctor, Denize Atan, told CBS News partner network BBC News. "He also used to snack on crisps (chips) — Pringles — and sometimes slices of white bread and occasional slices of ham, and not really any fruit and vegetables."

The boy has what has been diagnosed since 2013 as "Avoidant/restrictive food intake disorder" (ARFID). Previously known as Selective Eating Disorder, it can be dismissed by parents as simply being fussy. But the health implications are very real, and they're not limited to vision impairment.
Click to expand...

Was it in the end the lack of ketchup or mayonaise that caused the problem?
Reactions: Rose Karuna and Essence Lumin

Yeah, I want to put horseradish and capers on my steak and cheese sandwich. Maybe its a sign to prevent blindness.

What did Helen Keller say when she fell off a cliff? Waves hands wildly.

My guess .. it was a case of too much mastur...... nevermid.
Reactions: Rose Karuna, Essence Lumin and Sid

It could be the vinegar a lot of Brits tend to poor over their fries to make it taiste awful.

Sid said:
It could be the vinegar a lot of Brits tend to poor over their fries to make it taiste awful.
Click to expand...

Sigh. The Brits aren't known for their culinary expertise but malt vinegar on fries is essential. Lots of it too.
Reactions: Tirellia

Only crisps and chips? What were they even thinking?

Essence Lumin said:
Sigh. The Brits aren't known for their culinary expertise but malt vinegar on fries is essential. Lots of it too.
Click to expand...

And americans are? Jeez... sweeping generalisation!

Kara Spengler said:
Only crisps and chips? What were they even thinking?
Click to expand...

Obviously not thinking. That's like asking an anorexic: why?

Sid said:
It could be the vinegar a lot of Brits tend to poor over their fries to make it taiste awful.
Click to expand...

Essence Lumin said:
Sigh. The Brits aren't known for their culinary expertise but malt vinegar on fries is essential. Lots of it too.
Click to expand...

Vinegar on the fries? Really? Bleccchhh! Surely this is not correct. That just leads to soggy, acidic fries. On the fish, though, that malt vinegar is great, and right in line with all sorts of uses of acidity to cut through fatty dishes. See, for example, American barbecue sauces which almost universally feature apple cider vinegar, or any number of French sauces that feature lemon juice or vinegar, such as Hollandaise or even the Dutch/Belgian fave for fries, mayonnaise. For that matter, the standard American topping for fries, ketchup, is vinegar based, too -- but it is properly applied just before eating the fry so as not to lead to sogginess.

As to the British culinary expertise, let us remember that many American impressions of English food were formed in the years post WWII when times were tough in Britain, and "luxury" foodstuffs -- like steaks or fresh veg -- were non-existent. From what I have read, they have some magnificent eating and a thriving culinary scene now.

However, if one of our English friends comes along and assures me that "fries with plenty of vinegar" is delicious, I'll need to rethink that.
Last edited: Sep 4, 2019

You haven’t lived unless your fish and chips are swimming in vinegar... or more commonly for those with a religious aversion to alcohol - non-brewed condiment!

Getting a face full of vinegar fumes as you open a paper wrapped fish supper is a ritual I’ll never tire of.

I guess it’s what you’ve been brought up with. Vinegar on anything is an acquired taste, but with added salt and because your parents and peers say it’s amazing, you get used to it from a young age. It’s certainly not cordon-bleu or even fine-dining.
Last edited: Sep 4, 2019
Reactions: Innula Zenovka, Tirellia, Ryanna Enfield and 3 others

I never said that! Americans in general have bad taste but their are regional exceptions like NY/NJ pizza or southern bbq.