Lucierda Solari said:
What is AVX?

Also, the "add key" and "delete key" buttons in the Day Cycle Editor do not work.
Click to expand...

AVX stands for Advanced Vector Extensions and is a compile modification that can be added to improve and optimize vector calculations, this can increase framerate slighly but requires CPU support (all CPU's from 2011 and above should in theory support it, Intel does support AVX2 even for a long time now and AMD supports it from AMD FX 6000 series and upwards)

You always want the AVX version, it is faster and is always the most recent version. If your CPU is not supported (you'll notice when the Viewer doesn't start without any error message) you can always take the non AVX version though it is updated much rarer and may lack behind months of work and features, important ones like until recently Animesh.

About the buttons: i'll have a look into them, thanks for reporting.

NiranV Dean said:
There is no option in BD to disable certain group chats. Just hide their popup chats for either all or none.

Yeah, for a platform built around chat it's chat tools are weirdly goofy, especially group chat. Shooting down group chats for the first 30 minutes of being logged in is never fun.


NiranV Dean said:
Also nice pictures but the last one seems to be missing Ambient Occlusion, it cuts into the realism of the picture, especially the shadowed parts behind you look unnatural with the ever-flat shadowing, the objects in shadows show no depth. I have to note though i'm absolutely not a fan of the image noise filter that you seem to use. If there's one option in any game i always disable it's definitely Post Process Noise/Grain. Might just be Volumetric Lighting though if you used it with lower resolutions.

Nonetheless they are great shots especially for your first ones. Here's a teaser for the upcoming update.
Click to expand...

I have a thing for that Instagram-esque filters, even if it's super cliche and newbieish, I just like the texturing of it. Though I don't use it consistently, the 2nd one I avoided it because I liked the cleaner look. I only really did it for the first one, the third one had it heavily because I was looking for a gritty/sandy texture. Thanks for the tips though, I'm looking forward to messing with it again.

So when are we getting the fix for the day cycle buttons?
Reactions: Govi

I don't know what this was. It happened every time I relogged. Had to reinstall the viewer to fix it.

Dundundun we can deduct from this that it is not a settings related thing. This brings me immediately to the completely logical and only solution that... your Windows, or Firewall or AntiVirus or whatever is deleting/blocking one or more files after closing the Viewer. Don't ask me how i found out, thats the only logical explanation.

No seriously this could be many things, something is blocking an essential file, or a file didn't unpack properly (corrupted files), who knows.

I do get an instant crash, even pre-splash screen that the Viewer has stopped working, it is super are, basically only happens once every version i put out and only ever seems to happen after i haven't started the Viewer for a long while after like compiling a new build or something. No idea if this is related. This was the UI 4 years ago.
Click to expand...

This was absolutely my favorite UI. I miss it tons.

Dragon said:
This was absolutely my favorite UI. I miss it tons.
Click to expand...

Agreed. It had style, it was unique but sadly it was highly flawed and LL's UI is simply too limited for what i was trying to make it look good. 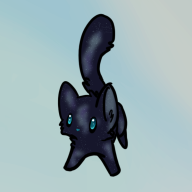 There is no option in BD to disable certain group chats. Just hide their popup chats for either all or none

Firestorm does this by adding the group to the blocklist. It looks like "Group:[UUID]" and blocked type is (By name).
This is the main thing holding me back from using Black Dragon, as I am in a few groups for a reason, but need a way to shut them up while being able to keep an eye on the important ones.

NiranV Dean said:
There is no option in BD to disable certain group chats. Just hide their popup chats for either all or none.

Chat by any mans is an extremely low bandwidth service, so the few bytes/second this would free up on their server bandwidth are really negligible. So this is probably extremely low priority for Linden Labs.

In the mean time adding this feature to the client would add an important quality of life feature for everybody and solve a real problem, while just pointing fingers at Linden Lab for sure does not.
Last edited: Dec 20, 2018
Reactions: Vaelissa Cortes and Eli KittyWitch

Ignoring incoming messages is hardly a fix for a problem that is merely an annoying inconvenience.

I don't agree with Firestorm's approach, it simply ignores the incoming message and how much bandwidth and whether it is worth saving it is out of question. It's simply a question of efficiency, besides group chat especially is often a laggy and unreliable pile of shit and any improvement would be a welcome one, especially the reliability of said chats. Not to mention that it would be an absolutely trivial task for LL to add an option that simply outright "tags" a person to not participate in chats, the same way you can exclude people from chat as administrator. It's literally a 5 second copy paste action with a new option linked to it.

And while we don't have the option for it we as users can simply set group chats to not pop up, not flash or even play a sound to reduce their annoyance, in addition we can simply close and leave any conversation we don't want, it's as easy as doing a single right click followed by a left click, it's what i've been doing for years and i don't see a reason why others can't do it for the time being. If you truly want this feature then maybe you should come to the TPV meetings and tell LL that this feature is important for users and would save LL and everyone else quite some hassle.
Reactions: Vaelissa Cortes

Well your browser, your rules.

That you disagree with Firestorm and really hate this viewer is well known anyways, so this does not come as a surprise.
Reactions: Vaelissa Cortes

Bartholomew Gallacher said:
That you disagree with Firestorm and really hate this viewer is well known anyways, so this does not come as a surprise.
Click to expand...

Just don't mix up my Firestorm hate with reasons i don't want to do what they do.

Hating them comes from both personal reasons and design choice/development reasons.

Me disagreeing with what they do is however not based on my hate but rather just the aforementioned design choice/development reasons.

Both disagreeing with them and hating them is based on how and why they do things but only disagreement also plays into why i hate them but hate does not alter why i disagree with them.


I don't weight Viewers in how many users they have or what features they got in general, i weight Viewers in how much bad they do to Second Life. Firestorm obviously being at the very top with a huge margin over all others. With all Viewers except Phoenix and Emerald (and obviously excluding all illegal and/or old Viewers) pretty much having such a low negative impact that it is negligible and apart from the occasional controversial feature that Firestorm has too (such as lookat names) there's hardly much to talk about. Firestorm in the past however has managed to never disappoint me when it comes to new things that either hurt/annoy me as developer or cause trouble in SL in general... and i'm not talking about the controversial LOD limit change, that was by far the best (and only good thing) they have done for a long time in my book. Even if i wanted to not hate Firestorm i would be reminded why i did over and over. My users do a good job at fueling my hate for them if i don't randomly find a new reason to do so. Even today users occasionally tell me something about Firestorm that i didn't know about that makes my blood boil. Judging by how often i've been about to explode i could go through as volcano.

The only good thing about Firestorm is that they take all the flak for everything and i mean everything, even things they didn't do. And that's not counting the obvious, they have many times more users, so many that if i were to offer personal support like i do right now i'd be quickly in no shape anymore to help anyone, let alone work on my Viewer... or do anything at all.

Besides, i'm not the type of guy who wants to play unfair and taking features from other Viewers that makes them special is unfair play to me. I don't want people to use my Viewer because its Firestorm with better graphics, i want people to use the Viewer for what it is. Exodus Post Processing stack and Kitty's RLVa are obvious exceptions to this, RLVa is absolutely required to have to support the project as whole and the Exodus Post Processing stack was a special case because Exodus was about to... *ahem* die (ironic isn't it?) and i hate losing awesome features to the infinite nothingness, hence why i asked Geenz whether i could adopt it or not... no idea why Firestorm has it or how they were even allowed to get it when LL is so strict about their whole shared experience bullshit with Firestorm.
Last edited: Dec 21, 2018
Show hidden low quality content
You must log in or register to reply here.
Share:
Facebook Twitter Reddit Pinterest Tumblr WhatsApp Email Link
Top Bottom